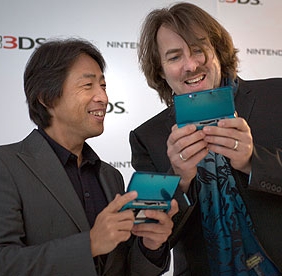 Thanks to Nintendo we were jetted off to Amsterdam yesterday to have a play on the company’s latest handheld console. So, apart from missing most of Wossi‘s banter due to a late flight, what did we learn during our time in Amsterdam?

Well, obviously the console itself has added a few features. Apart from the obvious extra dimension, it’ll also do handy things such as:
* The new  Circle Pad provides a full 360-degrees of movement, although fans of the four-way control need not worry as that also features on the console. The Circle Pad was particularly useful when playing Kid Icarus: Uprising, as moving left using it allowed the character to dash out of the way of boss-style attacks.
* Track your activity and see how much exercise you get as part of your daily life. This could *literally* be your step-by-step guide to getting healthy.
* Take a picture to auto-create your Mii avatar character – although you’ll still need to choose some basic options to do this, like hair style (and Mii’s won’t just be used in games, they can also become part of the games you can play – for example, the pre-installed game Face Raiders allows you to shoot targets with a face on).
* Augmented reality.

It’s not just the hardware itself that’s getting a boost, mind, as many of the games get an update to match.
* The Legend Of Zelda: Ocarina Of Time has been totally remade in 3D for this console.
* PES will include a new camera position so fans can have the feel of sitting in the stadium as the match is played.
* Street Fighter will use the StreetPass feature to hold virtual fights as you link up with other players just by walking by them in the street. That’s the same for Combat Of Dragons, where the giant creatures you breed to fight will face off against each other and you’ll see the result later when you log back in to your 3DS.
* Nintendogs + Cats has added that second furry friend to draw in cat lovers. Updates include more realistic fur and the fact that the puppies and kittens remember your face. If they recognise you they may come closer to you onscreen, if not they may shy away or bark.
* If you’re wondering why the popular Dead Or Alive fighting franchise has been silent for the past few years, the team says they’ve been planning a game on a handheld console for some time. They even went as far as to say “the 3DS is the first time that has been possible”. Dead Or Alive Dimensions (you see what they did there?) will be like a ‘best of’ from the series, containing all the highlights from the previous games. “Because of 3D it’s come back with a vengeance,” the development team promised.
* Pilot Wings Resort from Wii Sports gets its own standalone game – and flying over that sunny island in 3D looked pretty special in the onscreen demo.

The Nintendo Europe president Satoru Shibata said a system update at a later time would add in the internet browser, as well as the e-shop mode to allow users to purchase game downloads.

The release date is now confirmed at 25 March across Europe, honouring the end of March date that Nintendo had originally announced. While he wouldn’t reveal the wholesale price, Shibata said that it was up to dealers to set the retail price and it has already appeared on Amazon.co.uk at £219.99. If you’re worrying there won’t be any games to play on it, don’t. For starters, it plays existing DS games so there’s already a massive back catalogue. And between launch and the end of June Shibata promised there would be 25 new games launched for the 3DS.