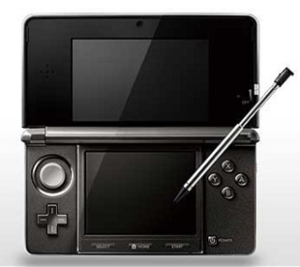 The reason we agreed to hide our inner BA Baracus (“Ain’t getting’ on no plane, fool!”) and head over to Amsterdam in the first place was to get our hands on this new bit of kit. And we weren’t disappointed…

Even the basics such as photography have a few new tricks up their sleeve. The two cameras on the front are pretty good when it comes to taking a 3D image. How this’ll look off the device we’re not too sure, but it worked well in practice and the pictures looked great when viewed on the 3DS. Some fun photographic features also mean you can put the two cameras on the front and the one on the back to unusual use – for example, taking a picture of yourself and someone else at the same time and merging them.

The Cinema Stand that Nintendo set up to showcase some of the best uses of the 3DS by playing relevant content outlined just what the console should be capable of. Resident Evil Revelations seems a creepy delight, giving the monsters some added bite (although the level we got to play later didn’t benefit as much as we’d hoped in comparison to other games).
Other highlights from the cinema showreel included:
* Ridge Racer’s use of the technology to put some virtual distance between the cars during the race and really making that work when the driver slams the peddle.
* An improved sense of the arena in Super Street Fighter IV thanks to the 3D.
* The Eurosports 3D TV service lifting the players and the umpires above the tennis crowd.
* Even the cutesy critters in Animal Crossing benefit by standing out more.

Does it always work? No. There is occasional ghosting (where the two images that create the 3D picture don’t quite mesh). In games where you use the gyro to move the console itself to control the action it can be especially bad as you constantly change your view.

The biggest disappointment was that Zelda’s lush backgrounds almost seemed too much for the 3D system to handle and made us blink our eyes to refocus more than a few times during our play test. However, the level of 3D on the Nintendo 3DS can be changed using a sliding scale on the right-hand side of the device – even to the point that you can turn a 3D game into boring old 2D.

Overall, this is a successful use of a technology that can sometimes be written off as gimmicky. The play feels fresh in games that might otherwise be starting to lose their appeal and as the 3D can be adjusted it should stop parents worrying that their kids are going to end up cross eyed.

The 3DS will no doubt be the must-have console at launch and it offers an interesting dilemma. We’d usually weigh up the balance of buying a new console against the number of games that will be available for it at launch and the chance that it will drop in price after the initial rush. However, those who already own a DS can make use of their back catalogue titles while they wait for new games to arrive. And as Nintendo has hit its promised March 2011 launch date you may not want to wait for the inevitable price drop before getting your hands on one, as that’s unlikely to happen before Christmas…