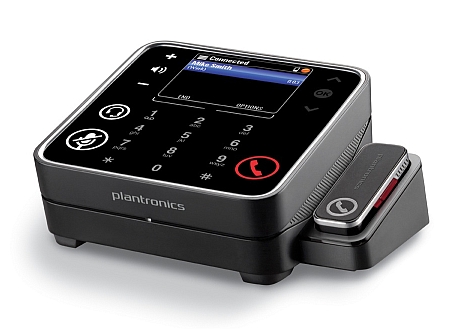 “You don’t need a phone anymore,” says a confident Plantronics spokesman as he shows off the Calisto 800 series Multi-Device SmartSpeaker. It’s a bold statement, but when you consider you can plug your phone line right into the back of it, sync it with your mobile and connect it to your PC to use software such as Skype, he may well have a point…

Plantronics also showed off the Voyager PRO UC. The dream for the device is that it will be able to make use of unified messaging, where as you switch from one place or device to another it knows and routes the calls through that service. For example, it knows you’ve left the house and sends calls to your mobile rather than the landline, or it knows you’re wearing the bluetooth earpiece so it sends it straight there.

The spokesman said that capability existed within the device already, it was now up to carriers to develop it and make it work.