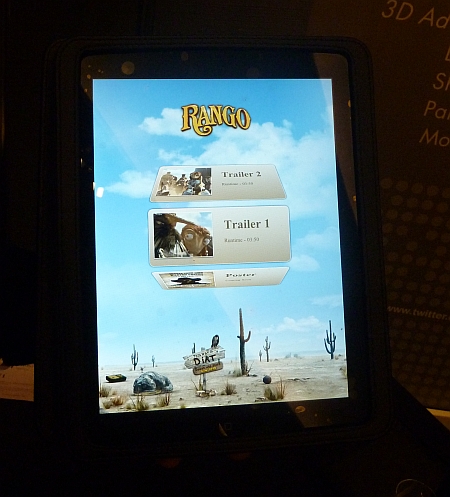 Not *technically* a gadget, but we loved the cool 3D adverts showed off by two new partners – Cooliris and Inmobi. In one example Absolute Gadget witnessed the advert move as the device is tilted and in another it could be expanded fully to offer a more interactive experience. Best of all, when you hovered over an ad and you’re within an app, it uses HTML coding to keep you within that app while still displaying the advert as a full usable page over the top.

The best example we saw was for the animated film Rango, which produced a carousel of trailers that could be accessed (see image).

A spokesman for the company said that ad campaigns using the technology would be rolling out in April, as the SDK had already been distributed to developers.

The software currently runs on iPod, but is being developed for Android.