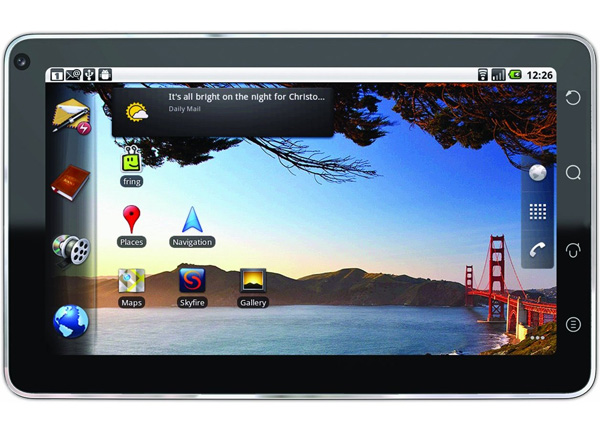 As much as Apple inspires unquestioning loyalty in some, in others, they would walk tothe ends of this earth to avoid fruit-based consumer electronics. So if you are one of those people looking for a non-Cupertino table computer then you may wish to give the Commtiva N700 a look in.

The N700 is an Android-based alternative to the iPad and much cheaper to boot. The seven-inch tab is quite well known by other names (it’s the Viewsonic Viewpad 7 but £100 cheaper).

Out of the box, it comes with 4GB of storage via a microSD card and runs a version of the Android OS (which Google has said won’t work that well as a tablet but it won’t stop manufacturers trying!!!). Running Froyo, the N700 has a well-built, capacitive multi-touch screen as well as a 3G modem which should give Apple a run for its money.

The Commtiva is thicker than the Samsung Galaxy Tab but about as thick as the current (version one) iPad. It also sports a black leather folio case to protect it. So while bigger than the Galaxy Tab, it is still small enough to pop in your handbag.

It also sports Bluetooth so can be hooked up to a wireless keyboard or headset to extend its usefulness. The unit is charge via USB from a PC or power socket.

The overall look doesn’t quite have the high styling of the Galaxy Tab, but for the money this is not a high consideration.

It also comes with gesture-based commands and a swiping keyboard which should make typing easier and quicker.

The home page is pimped up with three buttons for the apps library, web browser and phone while four hardware buttons sit to the side of the display for Search, Home, Back and the contextual Settings menu.

While there is 4GB of storage this is from the microSD card supplied, another 512MB is available as internal storage.

With the right media player downloaded you should be able to listen to a variety of file formats and while the built-in speakers are good, you’ll probably need to invest in a dock to play them.

It comes with a trial version of Co-Pilot sat nav app, but you can download Skobbler for free to get something almost as good.

While the N700 has a lot going for it, there are some minor flaws. The viewing angle is OK but not as good as the Galaxy Tab and the display means that it doesn’t do photo editing as well as the iPad. There is no front-facing camera which could have allowed it to get one over on the current iPad.

And because of the processor inside, an upgrade to Gingerbread seems unlikely. The ARM 11-based Qualcomm MSM7227 running at 600MHz limits you from using any Flash-based app so no iPlayer or 4oD for you! In fact moving images aren’t really the N700 bag.

However, battery life is excellent and means that it will happily run for several days without a re-charge.

Other than the poor video playback, the N700 is just right for emailing and light surfing the web from just about anywhere.