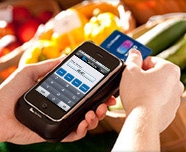 If the press release from VeriFone is to be believed, the days of fumbling for cash or hunting for your cheque book (do people still have those?) to pay the builder, child minder or milk man (do people still have those?) are over. That’s because traders will now be able to easily take payment from customers by card. At least they will if that customer has an iPhone 3 or 3GS.

Yes, VeriFone is launching what it claims is the UK’s first portable payment device which attaches to a smartphone, allowing consumers to insert their debit or credit card, authorise payments via PIN entry and make payment.

VeriFone’s Tony Saunders said that PAYware Mobile has finally brought the preferred payment method of the high street to the doorstep.

“Thanks to PAYware Mobile, paying for a whole range of services has finally taken a giant leap forward. Simply insert the credit or debit card into the PAYware Mobile card reader and enter your PIN, to pay for services in the most convenient and secure way possible,” he said.

Saunders said that VeriFone had undertaken rigorous testing and validation to develop “world-leading secure technology” and to ensure that “personal privacy is never compromised”.

“VeriFone has developed the most acclaimed security software on the market, adopting the same stringent security standards as those used at ATMs and major retailers across the world,” he added.

The PAYware Mobile card reader uses “end-to-end encryption” which keeps information encrypted throughout the entire transaction.
Saunders said that at no point during the transaction are card details or PIN numbers held on the merchant’s phone.