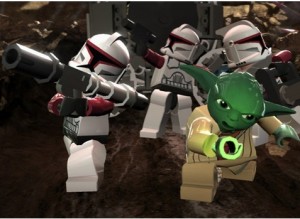 Do you like Lego? Do you like Star Wars? Of course you do. The premise of the Lego Star Wars series has therefore always been solid. Developer Traveller’s Tales knows this, so since 2005 it has released a series of similar games taking in franchises such as Indiana Jones, Harry Potter and Batman. As the saying goes, it ain’t broken, don’t fix it.

Especially as this is Lego. Broken or not, you can fix it – you can stick a minifig’s head or some more wheels on it. Plus, this is Star Wars – which means there are new stories from the animated series to explore. And most importantly, this is a video game – the only pop art form where sequels are often improvements and technological advancement is not just there for show – it’s a necessary fact.

Thanks to that, LEGO Star Wars III looks better. There are excellent levels where the only illumination is from your Jedi’s lightsaber flashing through the gloom of a subterranean combat zone. The mission control/menu area is a better game in itself now, featuring more unlockable content and goodies. The story elements and cut scenes are also now integral to game play, so goal definitions make more sense than simply threshing to the end of the level. The silent comedy is still funny (plus, no costly voiceovers needed!) and the character animation is still cute, even down to differing lightsaber fencing styles.

There were a few areas where we weren’t feeling the force, however. Sadly, like dog-chewed and sofa-hidden Lego bricks ruining the completion of a model, this game has a few unfortunate flaws. The Jedi levitation of bricks is an electric wire loop game, probably accurately simulating the concentration needed by a real master of The Force but jarringly difficult for the young Padawans this game is targeted at. The Real Time Strategy elements are caught between stools; too complex for young gamers to build and deploy forces effectively, yet with so much margin for error that a lazy grinder can plod through an entire battlefield with one character. We managed to beat an entire army with a solitary stormtrooper and a lot of spare time.

The need to unlock a huge amount of content to achieve 100 per cent completion also turns into a bit of a slog. And while the first run through a level is quite hard and time-consuming, subsequent visits become trivial trawls, with your invincible Lego men blandly nuking everything in their path.

As a premise, it’s still excellent, but that quality also serves to highlight some of its inadequacies. So, while this is no Jar Jar Binks, it’s not quite Han Solo either.