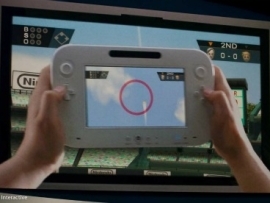 It’s all about blurring boundaries, according to Nintendo. “Watching TV and playing console games have been completely separate experiences. The new controller removes these boundaries, creating a more dynamic and fluid gaming and entertainment experience,” the company said of the Wii U, a controller with a 6.2-inch screen.

“Adding a second screen to the living room creates a multitude of new video game experiences while offering families a variety of options to customise their entertainment,” the spokesman continued.

“Previously, video games played on a home console have been confined to the TV and offered identical viewpoints to each player in a multiplayer environment.

So what can it do?

In multiplayer games:
* The player using the new controller can have a different experience than those looking at the TV. This will offer a wide variety of competitive and cooperative opportunities.

In addition to the 6.2-inch screen, the new controller also features an accelerometer and a gyroscope, a rumble feature, an inward-facing camera, a microphone and speakers.

It’s also the first time the Wii will support full HD graphics. However, the system is also backward compatible and can play all Wii games and use all Wii accessories.

Image courtesy of Cnet. Read their hands on verdict here.