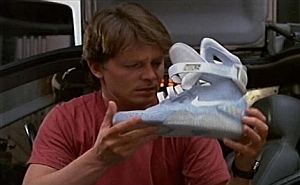 Nike has put Marty McFly’s self-lacing shoes from Back To The Future II into production! Producer Frank Marshall hinted at the prospect with some teasing tweets earlier this week.

Nike CEO Mike Parker officially unveiled the Air Mag shoes along with the news that a limited run of 1,500 pairs will be auctioned over a 10-day period on a dedicated eBay site.

All proceeds from the sale will go to the Michael J Fox foundation.

“This project is exciting because it brings together three very passionate audiences: the Parkinson’s community, the sneakerheads and The Back To The Future fans,” Fox said.

Amazingly, Nike has delivered the shoes a few years earlier than when Marty buys them in the films – 21 October 2015, fact fans.

Does that mean hoverboards next?!