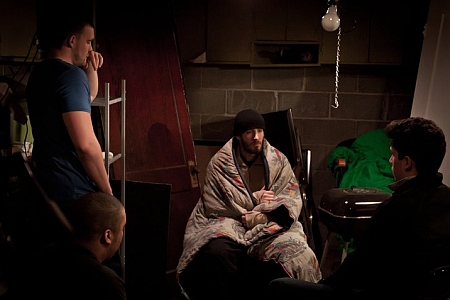 If you needed proof of how technology is shifting power from where it was traditionally held, then the way film can be broadcast to the masses is a great example. Here a first-time filmmaker reveals why he will be giving his film Memory Lane away online for free this weekend.

Film festival entries can cost as much as $300 – which is what it cost Shawn Holmes to make his entire movie – so he chose to skip the festival route early in the film’s release and give it away on his website 553AM.com.

“We may have a festival run, we may not. We’re living in this crazy time where traditional gatekeepers can be circumvented altogether,” Holmes says.

“The VCR, DVD players, in-home 3D and the internet; history has proven that movies aren’t limited to thriving on the silver screen and that with advances in technology come advances in how we watch them.

“Alfred Hitchcock said that television was like the invention of indoor plumbing. That it didn’t change people’s habits, it just kept them inside. Had the internet existed in his lifetime as it does in ours, he could have easily made the same realisation that we have.”

Holmes, who is the youngest nominee in the history of the West Virginia Filmmaker of the Year Award, feels he’s following in the footsteps of forward-thinking filmmakers such as Kevin Smith and The Polish Brothers by providing free access to Memory Lane.

The writer, director and producer has also used the internet to successfully promote the movie. In less than a week the trailer received over 17,000 YouTube views and the active Facebook page has over 4,500 fans.

“Innovation is paramount to our success,” Holmes added.

Memory Lane is an independent thriller about a war-veteran who travels between our world and the afterlife in search of his fiancé’s killer… by stopping and starting his own heart. The film goes live at midnight on 11 November 2011 at 553AM.com.