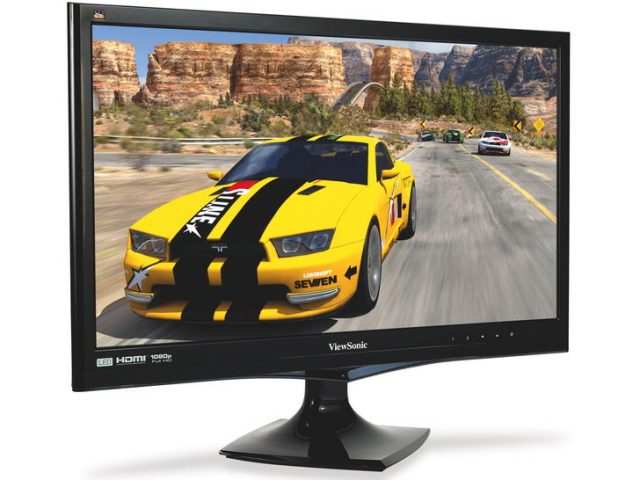 ViewSonic launched a new 3D display a little while ago, and we are happy to say that this monitor does not sacrifice resolution to get 3D.The ViewSonic V3D245 offers full HD (1920×1080) resolution, meaning you can have the monitor in 2D and 3D and still get bright whites and robust deep blacks in either mode.

This 24 “unit (23.6-inch viewable area), comes with a free-standing rack, which is very easy to assemble. Setting it up was a breeze and took only a few minutes.The ViewSonic V3D245 also has a variety of ports, including dual-link DVI, HDMI and VGA. When connecting the monitor to a desktop graphics card (a 3D Vision Ready NVIDIA card is required if you want to take advantage of 3D content), it is recommended that you use the DVI connection for better picture quality. DVI-D supports a 60Hz refresh rate in PC games, while HDMI 1.4a only supports 24Hz at a resolution of 1080p. running 3D games at 24Hz can cause eye fatigue after gaming for for a while (ideally want to 60Hz per eye for 3D games). The HDMI connection is best with a PlayStation 3 or a stand-alone Blu-ray players as far as 3D multimedia content is concerned.

The ViewSonic includes a pair of NVIDIA 3D active shutter glasses and a USB charging cable so you don’t have to purchase them separately. What’s attractive about the V3D245 is that it has a built-in IR emitter so you don’t need to worry about plugging in an external component. With a built-in IR transmitter for a new standard in 3D monitors, and it’s markedly an improvement over the previous generation of 3D displays.

The monitor works well with a host of 2D and 3D games. Super Street Fighter IV looked great in 3D powered by a 1.5GB NVIDIA GeForce GTX 580 graphics card. Playing Crysis 2 in 3D mode was great with images almost perfect without ghosting. The monitor has 300 m² brightnesswhich makes for a great-looking display.

The ViewSonic V3D245 sports a 3D HDMI 1.4 port, you can plug in a Sony PlayStation 3 or a compatible NVIDIA Notebook PC. ALthough, if you have a laptop with an NVIDIA GeForce 400 or 500 series video card, you can download a driver from NVIDIA.com to get your HDMI port to transmit HDMI 1.4a to the V3D245.

Finally, we found the ViewSonic V3D245 be at a premium monitor for 3D gaming and multimedia. There are some features that you can’t have in a 3D monitor, such as a larger screen, better viewing angle and height-adjustable stand, compared to an IPS display. But if you are really into 3D gaming, you can’t do much better that this display with a built-in IR emitter.