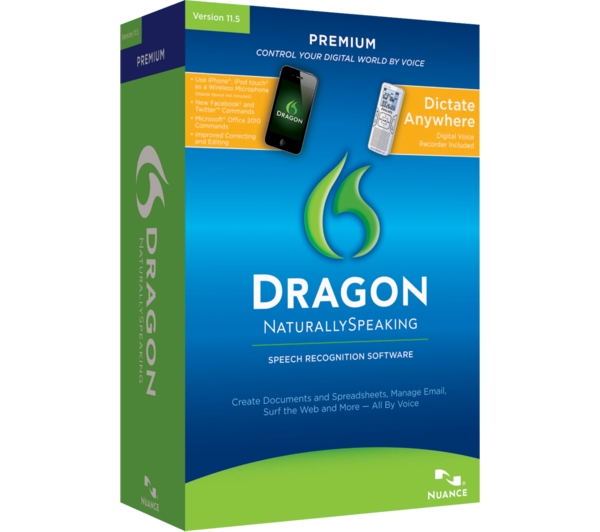 Voice recognition software has been around for quite a while and this reviewer remembers them when most, if not all of them were pretty dreadful affairs. However, much has improved over the years and Nuance is one of the few coompanies that has made a decent stab in this area.

The latest version for Windows from the company is Dragon NaturallySpeaking 11.5. This is a boxed standalone product, but is also available as a free upgrade for users of version 11 last year.

Despite all the hype surrounding Siri on the Apple iPhone 4S, voice recognition has still not yet got to the point where computers can understand the context of where someone is saying. Instead, the application compares the parts of speech with its database and display, what is hoped are the right words on the screen. There is a lot of processing power that is needed just to transcribe voice to text. Luckily there is a lot of compute power in PCs nowadays.

This reviewer remembers when setting up such an application required hours (and sometimes days) of training the app to recognise your voice and accent before it was capable of understanding what you are talking about. Dragon Naturally Speaking 11.5 takes around five minutes.

It is already amazingly accurate out of the box, but with further training it can be improved a little more. This is especially true when on the odd occasion the app gets a word wrong. A simple correction is noted for further encounters with the same word. To do this, you say correct after correcting a word and the app learns for next time.

The application works well and commands for other functions and text editing do so too, although this requires the use of a specific vocabulary. A context-aware desktop sidebar displays a list of commands that are available when you are not sure which is the correct command to use.

Dictation is somewhat of a skill in itself to master as pausing for breath or to collect your thoughts can play around with the applications contextual analysis that it uses to figure out what you are saying. You also need to dictate punctuation as well (exclamation mark)! However the update makes the process slightly easier by taking a few steps out of the process. Saying “bracket that” will put the previous phrase in brackets rather than saying open bracket then the phrase, then close bracket.

The software works with just about any other application installed on Windows. It can also be used to launch other apps as well. Commands such as “search the web for clothes shops will launch a browser and open up a search page. You can also use the software to update facebook and twitter as well as other social networks.

With the Premium boxed edition comes a corded microphone headset so you can dictate straight out of the box. But there is also an app for iPhone that turns your smatphone into a wireless dictation device.

Overall, we are very impressed by this software. It may have taken years to get there but talking to your computer no longer feels like a thankless task!

You can purchase Nuance Dragon NaturallySpeaking Premium 11.5 by clicking on this link.