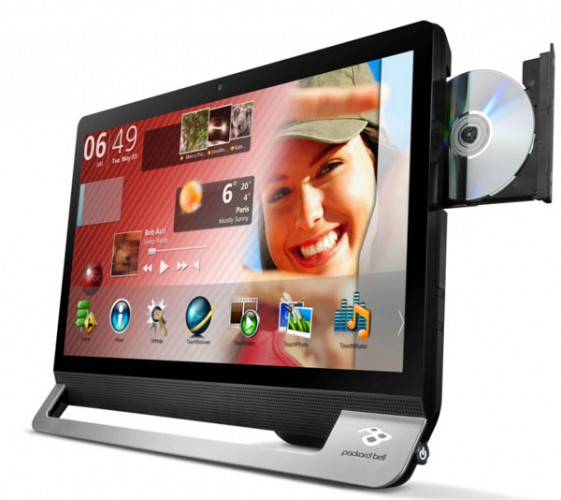 All-in-one PCs are becoming more popular nowadays. Packard Bell has a new one out and is heavily influenced by parent company’s Acer.
There are 2 models called oneTwo M and oneTwo L, both are the slimmest ever almost 65 per cent than previous AIO PC, so they can be easily place wherever you want and lightweight to easily carry from room to room. you can adjust the tilt – so you get perfect viewing whether it’s mounted on the wall or placed on a desk.

The back of the oneTwo is similar to that of the Acer Aspire Z5600. The same software is also installed on both machines. The package comes with Acer TouchPortal software. They look good but is a tad superfluous as it provide links to existing applications. This new device is an all-in-one PC that sports a sleek design and functions as a cinema, digital TV, sound system, photo gallery, DVD player/recorder.

The interface feels slow, and some movements, such as is required to fire up the TouchPortal interface, take a long time to come to life. Many package applications, such as Globe, in particular – battle to run fluently.

Fortunately, it has inherited the positive traits of the Acer. The 23-inch display is bright and sharp and evenly illuminated through resolution 1080 X 1920 native, sensitive and accurate in our review.

The unit itself looks good and feels good, thanks to the shiny black exterior sitting on clear plastic legs. The gentle curve is again influence from Acer’s design book and will at least look good in the study. It also sports a good range of ports; six USB ports, eSATA,  a card reader  HDMI-in , jacks for audio in and out mean you can connect your digital camera, tablet, mobile phone, hard drive, headphones and more with ease.

It features the latest second-generation Core processors from Intel. You can choose between discrete graphics from nVidia or AMD or choose Intel’s own integrated graphics.

However, the only real disappointment – especially considering the size and quality of the screen – is the omission of Blu-ray. This has become common on traditional desktop that are cheaper. Blu-ray seems to be reserved for these competitors, we hope that this change soon.

However, the oneTwo are solid, but not too exciting, AIO system. The main problem is the that the Acer is very similar. With little separation between the two in terms of specifications and performance, and we will have to lean towards the Acer as it looks a little better.