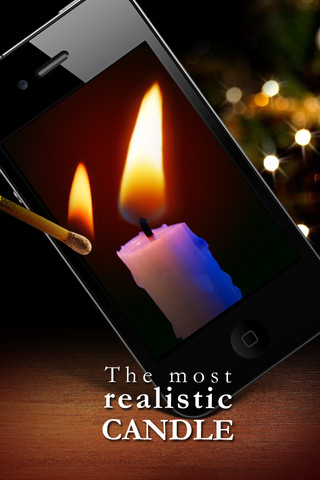 An app which simulates the flickering of a wax candle has been hailed as the most pointless app ever developed.The ‘Virtual Candle‘ beat a string of other useless apps, including one which mimics the cracking of a whip, to claim the unwanted title. ’You are Rich‘, which places a gem on the person’s home screen, supposedly making them look wealthy, was voted into third place.

In fouth place was ‘Goggle Eyes‘ – where users find themselves being stared at by a monkey which follows their head movement. Sim Stapler, where users can simulate the action of a stapler, completed the top five.

Yesterday a spokesman for OnePoll, who commissioned the study, said: ”Any development in technology will always be used to find ways to entertain and engage people, but with smartphone apps it seems there’s less of a requirement to provide any substance.

”It’s perhaps hard to understand why anyone would download an app just to be stared at by a monkey, but luckily for Goggle Eyes or virtual candle, people are amused by this stuff and continue to download apps that have seemingly no practical use.

”Life can be very serious sometimes, so while it might be a struggle to see the point of certain apps, a bit of novelty never does any harm.”

A team of experts scoured the web and compiled a list of apps considered pointless. A panel of 2,000 people were then asked to vote.

An app which enables you to poke a rotund man in the belly was sixth, another which does up a zip was eighth, and one which milks a cow was 11th. ’Smart’ phone technology will even let you spend your free time shaving a man (12th), having a dog lick your screen ‘clean’ (13th) or allow you to deliver a classy marriage proposal (15th).

The average person has 20 apps on their smartphone, but describes just a quarter of that figure as useful to them or that they use daily. In fact, 45 per cent of the study can’t help themselves downloading apps they know will be pointless- but claim they find them addictive.

Just under half the study (49 per cent) go as far as to say they could not live without apps. A third obsess constantly over beating a top score on an app, while over a tenth have played one while on a date.

More than one in ten has played an app while driving a car and a third play them in bed. Sixty per cent of the study admitted to deleting an app they found rubbish straight after downloading.

But even when promising themselves they won’t download anymore pointless apps, one third confess they still regularly install more.

The OnePoll spokesman added: ”The ability to download instantly and have a new content at your fingertips is a compelling thing to have.

”But with free or low-priced content you of course aren’t assured of either quality or performance and the amount of time dedicated to seemingly pointless apps is baffling.

”There are hundreds of apps that provide many useful functions and enhance a hectic modern life, but these results show that if something is quirky enough or even just plain stupid, it can still prove a major hit.”