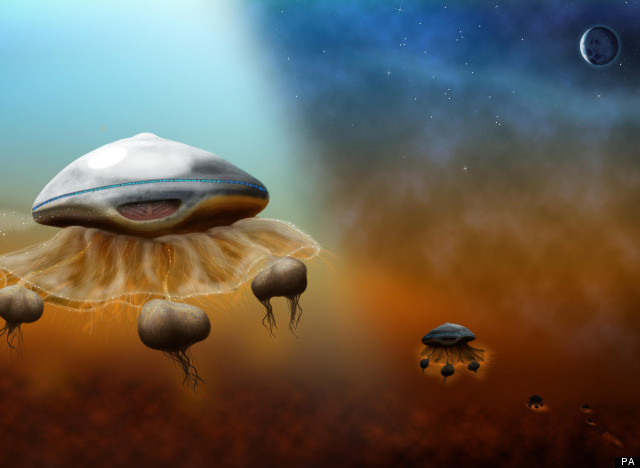 “But while they might resemble jellyfish, they will live not in the sea but in the atmosphere of a Jupiter-like planet, where they float around,” Aderin-Pocock said.

The scientist, who is also a government adviser, said that her vision of aliens is an “inhuman, silicon-based life form that looks much more like a jellyfish than sci-fi’s little green men. It is likely that there is extra-terrestrial life – it is just more alien than you’d imagine.”

It is hard to say whether she got her vision from sci-fi novels or working in government.

She said: “Some (scientists) have suggested that hydrothermal vents, which bring very hot, mineral-rich water gushing through the ocean floor, could have provided the spark that triggered the creation of early life.

“Japanese scientists recently simulated the conditions inside a thermal vent and were able to generate an electric current. They think this could have helped convert carbon dioxide into complex organic molecules that formed the chemical precursors of life.”

“The more we find out about the conditions, in which life can occur, the more precise our calculation of the likelihood of extra-terrestrial life becomes.”

She said that around four intelligent extra-terrestrial civilisations could exist in our galaxy, the Milky Way. But they are so far away it is unlikely we will ever meet them.

“The Voyager 1 spacecraft, which is carrying a recording of greetings from Earth in different languages, has been travelling through the Solar System since the 1970s and has only just made it into deep space,” she said.

“To get to our nearest neighbouring star, Proxima Centauri, would take it 76,000 years.”

Dr Alderin-Pocock made the comment just in time to promote her new show “Do We Really Need the Moon” on TV channel Eden today at 7pm. There is also a free e-book.