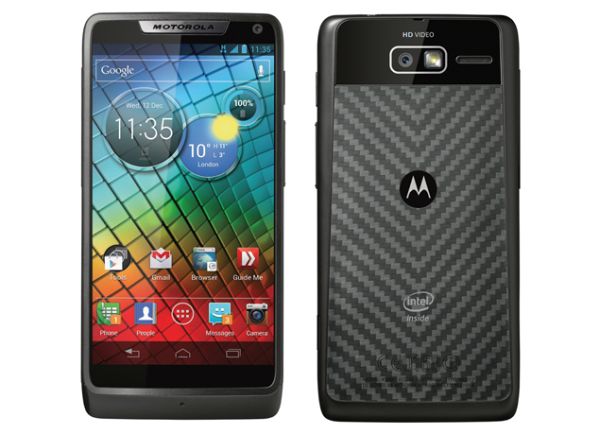 Motorola has finally got its first Intel-based smartphone the RAZRi into UK shops.

The handset boasts a single core 2GHz Intel processor, is based on an Intel Medfield Atom system-on-chip, and is the second handset to feature an Intel chip.

While the processor may not be much to boast about (it’s pretty fast but just one core!), it does come with a 4.2-inch “edge-to-edge” screen with a very slim bezel.

While not offered directly through any major network, the Ice Cream Sandwich-based smartphone can be bought from the likes of Phones4U, Amazon and Tesco Mobile. Amazon said it would ship on Friday.

Available either Sim-free or on contract, the phone costs around £345 SIM-free, cheaper than the Galaxy S III or HTC One X. New handset available free on tariffs above £21.50 per month from Phones 4u. The retailer is offering free headphones to the first 500 people to buy the new Motorola RAZRi. For £31 per month you can get 1 GB of data, as well as unlimited voice calls and texts.

The Intel-based smartphone comes with a 4.3-inch qHD Super AMOLED screen that offers a pixel density of 256ppi. The single core processor is supported by 1GB of RAM and 8GB of internal storage. For expanding memory capacity, you can use external memory sticks in its microSD slot.

The Motorola phone features an 8MP rear-facing camera capable of capturing video at 1080p at 30fps. There is a VGA front camera for helping you make video chats. The device is powered by a 2000mAh battery that delivers up to 20-hours life, and measures 122.5 x 60.9 x 8.3mm.