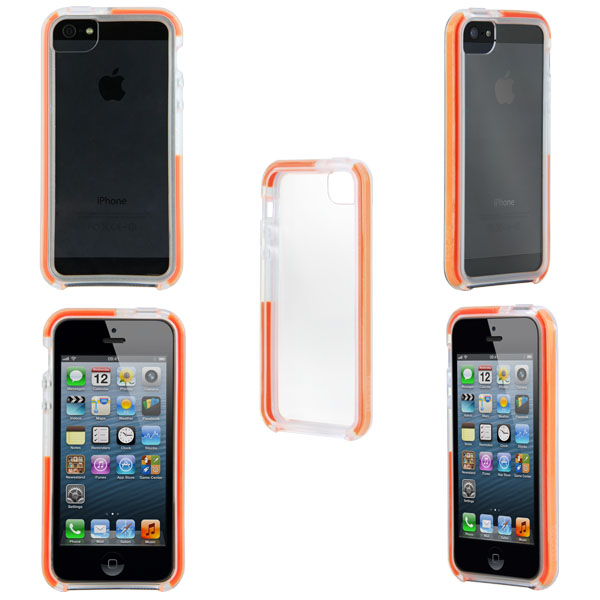 Not long after the launch of the iPhone 5, come a slew of cases and accessories to protect and enhance the Apple smartphone.

One such case is the new Impact Band from Tech21. It has a shock-absorbent D3O polymer to help resist the drops phones get in normal use.

As the iPhone 5 has a softer aluminium outside band, instead of the iPhone 4’s stainless steel version, such protection may more necessary than ever.

The Tech21 Impact Band looks like a bumper case. It protects the edges and leaves the front and back exposed. However, this case has a semi-transparent back to give further protection. The band comes in six colours, including smokey and clear. The coloured bands may deter thieves looking specifically for Apple’s latest device as it somewhat disguises the phone.

Putting on the case is a lot easier than some cases we’ve tried. The flexible band stretches over the phone.

It has a large cut-out for the camera and flash and there is a wide gap underneath for the speakers, mic and lightening port.

The band does however make using the power switch and volume buttons a tad more difficult to operate. The plastic overlay requires a bit more force to push the metal buttons underneath.

The band, like a lot of other cases, will make your iPhone appear fatter and wider but does ensure you have a good grip on the phone at all times, aiding against any slips out of the hand.

Protection-wise, the Impact Case is hard to beat. There are other cases that take protection to the extreme but for general use, this case should be worthy on consideration.