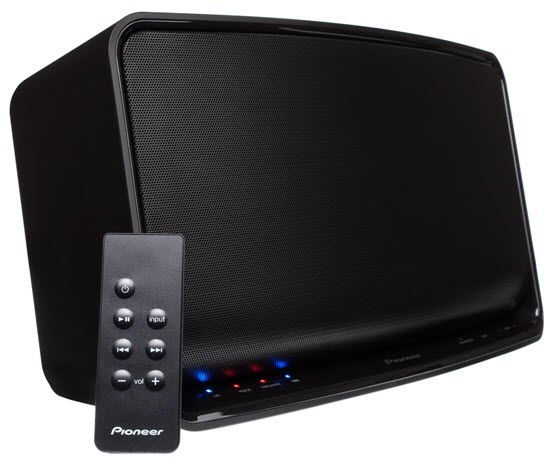 There is not much the new Pioneer SMA3 wireless speaker cannot do. It has it all. It streams audio via Apple’s AirPlay, as well as via DLNA, HTC Connect, and even a direct wireless feature for when there is no Wi-Fi network around.

Looks wise, it is not as stunning as the Bowers & Wilkins Zeppelin Air, but that’s a good few hundred quid dearer. But still, design doesn’t have to cost much, and for the price we were expecting something a little better. There is too much plastic and not enough of the quality materials that the price should command.

It is compact at just 320 x 180 x 145 mm and weighs 3.3kg. On the back it covers the rear ports of the speaker with rubber seals making the speaker splash proof.

For the price, we were expecting excellence in audio quality; excellence in this case was primarily in the connectivity. The sound was, in our opinion, not as good as hoped. Other speakers choose between AirPlay, WiFi Direct or DLNA. The SMA3 is the first speaker to be compatible with all three. But oddly, no Bluetooth. There is also Ethernet connectivity at the back alongside a USB port. There is also is a 3.5mm auxiliary jack and a power socket.

The speaker has a seemingly very bass-focused sound, which seems like it would be better in larger rooms. By the time you turn the volume up to what we’d like then the bass can get annoying.

The interface and control could be simpler but all in all, it does what it advertises. The technologically unskilled may find it too difficult to set up but anyone that has set up a Wi-Fi router will have no issues making this work.

Overall, the £299 is a bit rich for us unless it could deliver something fantastic, which sadly it didn’t quite. It looks dull, sounds not as good as we hoped it would. The saving grace in all of this is the connectivity and battery life. Probably good for a day at the beach though.

Best Bluetooth speakers to buy in 2015