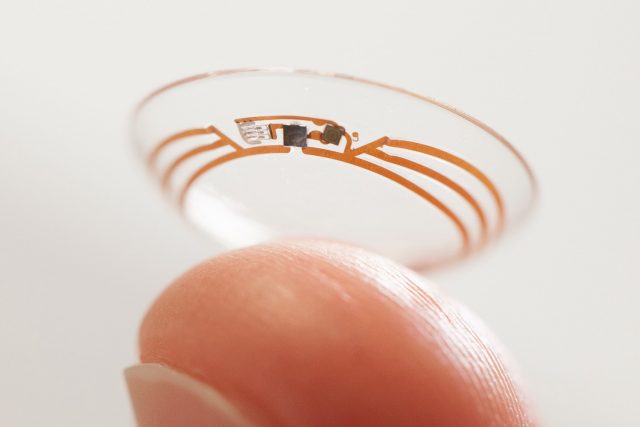 Google is developing a smart contact lens that is designed to measure and monitor glucose levels in tears.

In a blog post, Google’s X lab detailed how the lens could be used to keep track of a patients glucose levels and help keep their blood sugar levels within acceptable limits.

The firm’s scientists have been researching a number of ways to keep tabs of diabetics other than having to prick fingers for blood tests throughout the day, which often results in people checking glucose levels less frequently than they should.

Researchers have looked at various bodily fluids that could be checked and discovered that tears can be used effectively to monitor such changes.

The lens can collect and study tears. It uses a tiny wireless chip and a sensor that monitors glucose levels. The sensor is embedded between two layers of the soft material.

“We’re testing prototypes that can generate a reading once per second,” said Brian Otis and Babak Parviz, project co-founders. “We’re also investigating the potential for this to serve as an early warning for the wearer, so we’re exploring integrating tiny LED lights that could light up to indicate that glucose levels have crossed above or below certain thresholds.”

The researchers said that the technology is still in its early days but have completed a number of research studies, which are helping to refine the prototype.

The firm is also in discussion with the FDA and said there was still a lot more work to do to turn this technology into a system that people can use. Google is also looking for partners that can turn the prototype into a real product.

“These partners will use our technology for a smart contact lens and develop apps that would make the measurements available to the wearer and their doctor,” the researchers said.