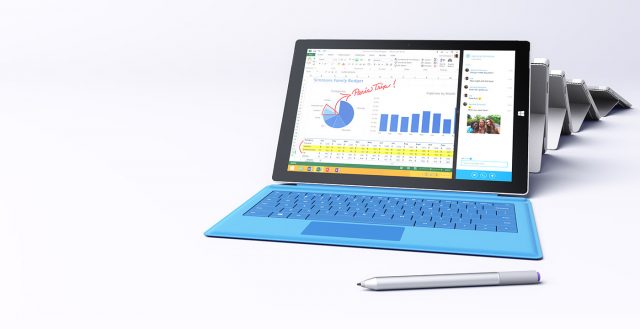 Microsoft showed off its new tablet, the Surface Pro 3, at a press show yesterday in New York.

The Surface Pro 3 is reported as offering a 12” screen with a 2160×1440 resolution. It’s 9.1mm thick and weighs just 800 grams. Speakers have been tinkered with, resulting in a device that’s 45% louder than previous iterations.

The main innovation, though, is the new “full friction” multi-position kickstand and Type Cover offering more comfortable positions to rest the tablet at. The kickstand has three different positions including a 150° “canvas mode”, while the Type Cover magnetically attaches to the screen, making it sturdier and more adjustable than before. Add in a larger trackpad and Microsoft is touting it as, “The tablet that can replace your laptop.”

Microsoft buddies up with BlackBerry