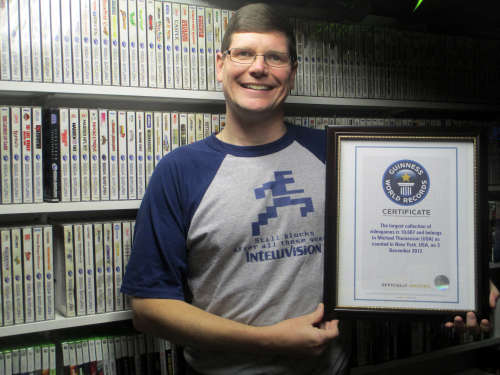 If you’ve got a spare several thousand grand knocking about, you might consider bidding for the world’s biggest collection of video games.

The haul is the meticulous work of New Yorker Michael Thommason, who had Guinness inspect and certify the collection back in December – coming in at 10,067 individual titles, it was officially crowned the world’s biggest collection. (He’s added about 400 more since then, and he’s chucking these new ones in too.) And just to prove it, whoever buys the lot will get the certificate too. And a lifetime subscription to Retro Magazine. And possibly a kitchen sink.

Thommason operated seven independent gaming stores over the course of the ‘90s and has worked at a retail chain for the last decade – meaning he was able to shamelessly flaunt his managerial status to get the nicest edition of most games. “Whenever I purchased a game that did not directly come from the distributor I was able to look through all our inventory and pick out the nicest copy of a game, including grabbing the nicest box and manual,” he explains. “As a result, the games in my collection are mostly pristine.” Indeed, the listing notes that over 8,300 are complete game-box-manual sets, and more than 2,600 of those are still sealed.

If you were wondering, he’s selling it off to help support his family – ridiculously, this isn’t even the first time he’s done it. “No worries, I’ve sold my collection many times in the past and still managed to capture Guinness’ attention, and it is entirely possible that I may again,” he chirps.