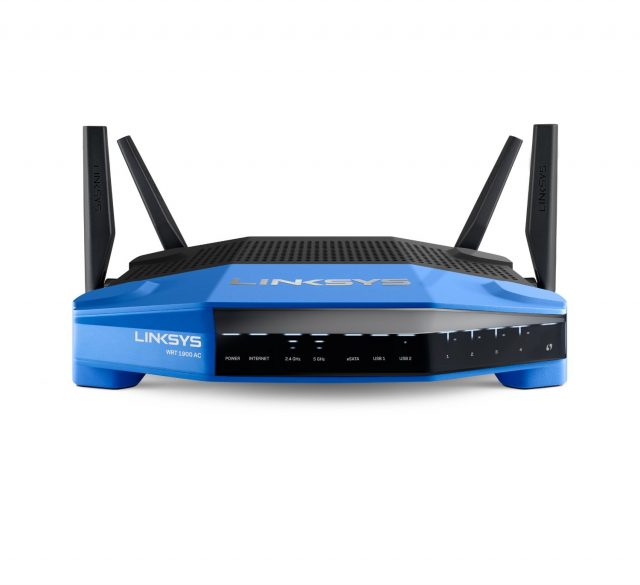 It’s black, it’s blue, it is somewhat large, but is this a worthy successor to the WRT54G router?

The WRT54G was released towards the end of the nineties and WiFi technology has certainly moved on since then, including the price.

As previously mentioned, the WRT1900AC router is solidly built with four removable and positionable antennae to allow you to fine tune wireless coverage.

It costs £230 and with that you get a 3×3 MIMO router with a top speed of 1300Mbps on 802.11ac and 600Mbps on 802.11n. There are four Gigabit Ethernet ports at the rear as well as a Gigabit Ethernet Wan port to connect to a broadband router (ADSL or Cable). On the rear are also two USB ports, one of which is an eSATA connector. These accept external hard drives formatted in HFS+, FAT32, or NTFS.

Powering up and heading into the web console shows one of the most friendly user interfaces there is around, bar none. There are widgets on the front end to make it easy to understand and configure (such as guest networks and parental controls).

Here is also a network map that shows all the devices connected to the router and this also shows what bandwidth is being used by what device. This is good for finding devices on the network that may be causing problems.

You can also use the remote management from anywhere in the world, you can log in by going to linksyssmartwifi.com and logging in via a Smart Wi-Fi account.

The QoS service (also known as Media Prioritisation) is also good at prioritising media playback on devices on the network. There is also a password-protected guest access system that can control up to 50 users on your network safely. The router also allows control via an iOS or Android app.

Performance wise, the best throughput is at the 5GHz range. The router is situated on the ground floor and in moving from first to loft, we noticed not too much degradation in throughput.

What sets it apart from other routers is its support for open source firmware out of the box. This includes the popular Tomato and OpenWRT systems. These should be a bonus for advanced users looking to add additional features and functionality.

While it is not the cheapest router on the market, it is by far the best despite its mammoth size. This would definitely suit a power user with a small office or home network setup.

The router can be purchased from Amazon for around £230.