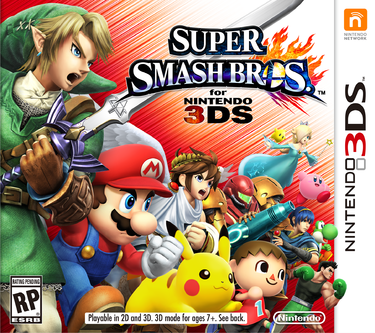 Putting Smash Bros. on handheld is a fool’s errand, surely. Squeezing Nintendo’s hyperactive, full-to-bursting four-player anarchic sugar rush onto a machine you can fit in your pocket is akin to recreating Rembrandt’s Night Watch on an Etch-a-Sketch, or asking George Osborne to not be completely vile for ten seconds. Well, they’ve gone and done it anyway.

The demo released a couple of weeks ago indicated that the frantically busy Smash gameplay would theoretically work on 3DS. The basic Battlefield level and five fairly straightforward characters were pleasingly easy to negotiate on tiny screens (for the record, we’re reviewing this on an original model 3DS, rather than the more spacious XL). It took us about an hour to get used to the controls – we here at Absolute Gadget HQ have been Smashing with a GameCube pad since the days of 2001’s Melee, after all – but once we were comfortable, it controlled perfectly. But could the full-fat Smash experience, with incredibly complicated battles and more options and hidden bits than there are Pokémon, fit onto a tiny cart?

Ridiculously, yes. Smash Bros. 3DS is clearly straining its host console at times but it’s a gloriously uncompromised game that in some ways even outstrips its immediate predecessor, 2008’s Super Smash. Bros Brawl on Wii.

The core Smash experience is the same as it’s ever been, with four fighters warring to knock each other off various arenas. Long-term fans will notice a number of small tweaks, most noticeably that wavedashing, which was excised from Brawl, is back. Several of the returning fighters have also been worked on, with changes ranging from subtle (Bowser’s stance is more upright than before) to considerable (Pit’s annoying-but-effective side-B move has been replaced with an entirely new one). The arenas have had the biggest makeover: developer Sora has obviously listened to complaints that Brawl’s levels were too similar, and there are vastly more varied battlegrounds here. Additionally, each arena now comes in an alternate “Omega Form”, which essentially turns every level into the plain Final Destination set-up, a clear sop to the slightly tiresome super-hardcore players that gives them a bit of variety in graphics and music for their no-item battles. A nice touch is that since this is Smash’s first time on a handheld console, most of the arenas are based on handheld games (special mention to the unlockable Kirby-themed level that recreates an original green-and-black Game Boy screen to fight on).

A new Smash means new characters, of course, and SB3DS outdoes itself with 36 regular characters to start and plenty more to unlock. Of the new crowd, while special mention has to be given to the addition of Mega Man and Pac-Man, allowing a Capcom/Namco/Nintendo/Sega four-way face-off when you add in returning guest Sonic, our favourites are Punch-Out!!’s Little Mac – a tiny, fast fighter who can put in loads of chip damage in seconds before finishing off with a mighty wallop – and, for giggle factor, the trainer from Wii Fit and her brand of deadly yoga interspersed with deliberately bland words of exercise encouragement.

By “regular characters”, incidentally, we’re not counting the ability to play as your Mii, who you can send into battle as a hand-to-hand brawler, a swordfighter or a gunner. It’s a further level of customisation from a series known for bending over backwards to give its players the option to play their way, and this bespoke element has seeped into other areas. You can tweak the stats of default fighters, for instance (though these customised characters can’t be used online), while the Classic mode is more customisable than before – when you start, you can spend your earned gold coins (which buy the ever-addictive trophies) to increase the difficulty, which in turn earns you better prizes. Additionally, you’re given the choice of who you fight next.

But the biggest customisation part comes in for Smash Run, a brand-new one player mode. It plays a little like Brawl’s Subspace Emissary, except you can customise your fighter’s stats before you start a five-minute platforming gauntlet and earn boosts to said stats as you go through, before fighting or racing opponents with your newly levelled-up character at the end. If that sounds confusing, well, it is. It’s quite fun though, and certainly better than the Subspace mode it replaces. It’s also an exclusive mode for the 3DS version of the game.

Ah yes, “the 3DS version”. See, this new Smash Bros. is actually a multi-platform release, with the Wii U version due sometime before Christmas – it’ll share the character line-up, but have different arenas. There’s an option to link up to the Wii U version, and apparently you’ll be able to use your 3DS as an extra controller when playing the Wii U game. Squeezing what is thus essentially a home console game onto a relatively humble handheld has led to some compromises – Sora has said that the Ice Climbers have been cut and the Zelda/Sheik and Samus/Zero Suit Samus double-characters split into separate entities in order to accommodate the 3DS’s limits, but that’s as far as it goes. Otherwise, SB3DS is a consummate example of what you can get out of Nintendo’s handheld. The graphics have been given a cel-shaded overhaul (which you can turn off) to make characters clearer on small screens, there’s a StreetPass mode involving a sort of tiddlywinks/spinning top hybrid, and if you’re short of gold to buy trophies you can use Play Coins. They’ve even gone so far as to add a battery meter and clock to the bottom of the touch screen, so you don’t have to worry about suddenly running out of juice in the middle of an internet scrap.

There are some problems, mind. Loading times are noticeable, especially on first booting up (and, incidentally, this is the first Nintendo game we’ve ever come across to have a day one patch, needed for internet play). Hopefully they’ll be less perceptible when played on the forthcoming New 3DS. Internet lag is a varied issue – sometimes it’s non-existent, sometimes it’s so heavy that the game has to keep pausing to recalculate itself. It seems to be more noticeable on more complex levels. Admirably, though, none of the players we fought in the laggiest matches ever dropped out, so it’s bearable if you’re patient. More disappointingly, remember the Target Test? That minigame that was one of the best parts of Melee because it gave you a custom course for each fighter, thus teaching you how they moved? And was then redesigned and thus ruined in Brawl? Well, now it’s gone altogether. In its place is Target Blast, which is basically Angry Birds but worse. Additionally, there’s a new minigame for winning trophies, Trophy Rush, which is like Jenga meets Tetris and doesn’t really make sense, which is especially galling since you have to spend your hard-earned gold to play it.

Happily, that’s basically it as far as whining goes. Super Smash Bros. 3DS probably shouldn’t have been attempted. But they attempted it anyway. And they succeeded.

Super Smash Bros. for Nintendo 3DS is out now as a retail game or downloadable from the 3DS eShop.