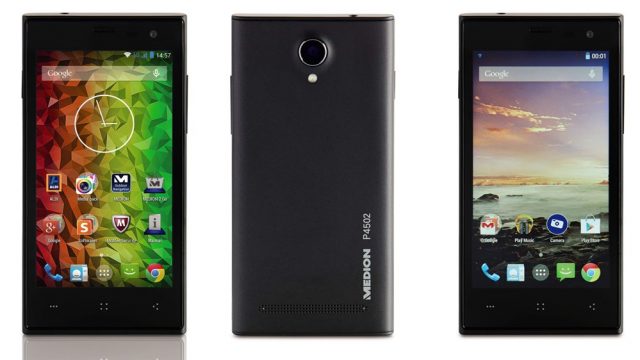 Budget supermarket Aldi is selling the Medion Life P4502 Android smartphone as part of its Specialbuys promotion for only £79, but is it worth the money?

As per usual, when the phone is gone, it is gone (that’s what it tells us anyway) – this means you have to act fast.

To get to this price, a few compromises have to be made. With the price, these we can live with. The phone itself is only a millimetre or two larger than its 4.5-inch display and has managed to keep the weight down (142g), so won’t make a literal or metaphorical hole in the pocket.

Unlike many new smartphones, the rear comes off so you can replace the battery, add more storage or insert a Sim card. At this point, it should be said there are slots for two sim cards, this will appeal to some buyers in the market.

There is a built-in speaker at the rear, which means that your hand will muffle sound unfortunately. There is also an FM radio too (you have to use your headphones as an antennae.

The only hardware buttons are the power switch and the volume controls. There is a headphone jack and a micro USB port for charging the phone.

The display is good enough for a budget model with a resolution of 960 by 450 and is IPS as well, which makes colours richer and increases the viewing angle.

There is 8GB of internal storage but 3GB of this is only available. Luckily the MicroSD card slot means this can be expanded on.

The cameras included are a 5Mp rear and 2Mp front-facing ones. The software for the camera offers pinch to zoom, HDR shots as well as face detection, smile detection and face beauty modes.

The phone comes preinstalled with Android 4.4.2 KitKat, which is good for a budget smartphone, but there is no word on whether it can or will be upgraded to Lollipop.

The pre-installed apps are an Aldi app which lists current SpecialBuys, a mobile shopping list and a store finder. Other apps include PhotoDirector, ImageChef, YouCam Snap and YouCam Perfect and Softmaker Office.

The 1700mAh lithium-ion battery is claimed by the supermarket to give up to 4.5 hours of talk time.

While it won’t match the high-end smartphones, the device offers great value for money in a somewhat slimline body.