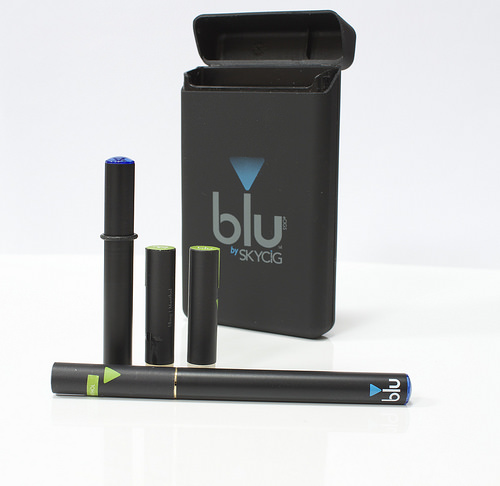 E-cigarettes are getting more popular as people try to get their nicotine fix without dying of some form of dreadful cancer. As such, there are now a plethora of different brands vying for the smoker that still wants to puff without the risk of developing emphysema in later life.

With e-Cigarettes, you don’t actually smoke, but “vape”. This is because there is no tobacco leaves to burn, rather a solution carrying the nicotine is vaporised and inhaled instead.

One such e-cigarette that was put to the test was one by Blu eCigs. The  starter kit costs £14.99 and contains two batteries, two cartridges, one USB stick charger and a carry case. The carry case is a sleeker version of a traditional cigarette packet and also doesn’t need to carry a picture of someone’s tumour on it.

The e-cig comes in two flavours; classic and menthol. We opted for the classic version as our test smoker was an old man bought up on strong cigarettes. In tests, the taste was satisfactory to our tester. When puffing, the tip turns blue, in order to distinguish itself from a normal cigarette.

Overall, this is a great way for smokers to kick the habit and have something familiar to use. Prices for the range start from £5.99 from Blu. The Premium kit we tested starts at £19.99.