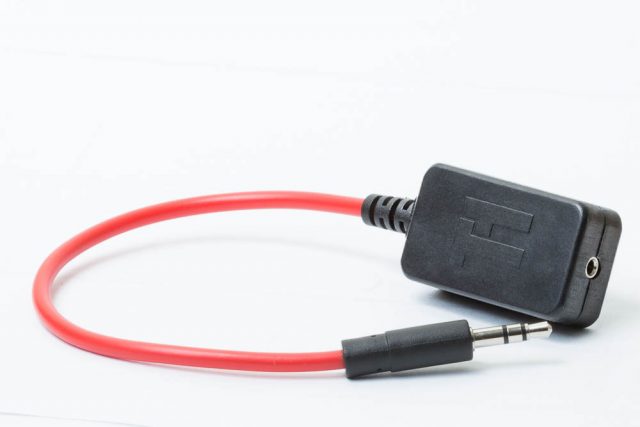 If you are looking for a handy tool for you DSLR to control when it takes a picture, Triggertrap has a gadget that could help.

The device is a camera shutter remote that can be controlled by your phone. IT consists of a cable with a block in the middle. One end of the cable fits into a camera and the other into the headphone socket on a phone.

The cable will require the user to download an app to either their iPhone, iPad or Android smartphone or tablet. The device works when you tell the app when you want to take a picture, this then makes a buzzing noise through the cable, which is picked up by the block. This then tells the camera to take a snap.

The app has many different modes to allow taking of all sorts of of pics and even a timelapse. There is a ‘simple cable release’, which opens the shutter to take a normal picture after pressing the red button. The ‘press and hold’ mode enables the user to hold the shutter open for as long as they choose, by just pressing and holding the red button.

‘Press and lock’, (similar to ‘press and hold’), makes it easier if the user wishes to hold the shutter open for longer periods of time. Just press the red button once to open the shutter, then press again to close it.

‘Timed release’ lets the user get a bit more precise. Just set the duration in which you would like to keep the shutter open for, then once the button is pressed, the shutter will stay open until the time has run out.

The timelapse mode can take pictures over a period of time. This sets the time interval for each shot, depending on what type of timelapse you do, then just press the button.

The timewarp mode works like a normal timelapse it takes 240 shots over say an hour, but the clever bit is here is that the app increases the distance between the photos from one every second up to when the last frame was shot one every 70 seconds.

The distance lapse mode uses the GPS capability of your iPhone or iPad to take photos at regular distance intervals, this means resulting movies look like the entire journey was conducted at exactly the same speed.

Overall, the cable and app are very easy and quick to set up and worth adding to your camera kit bag.