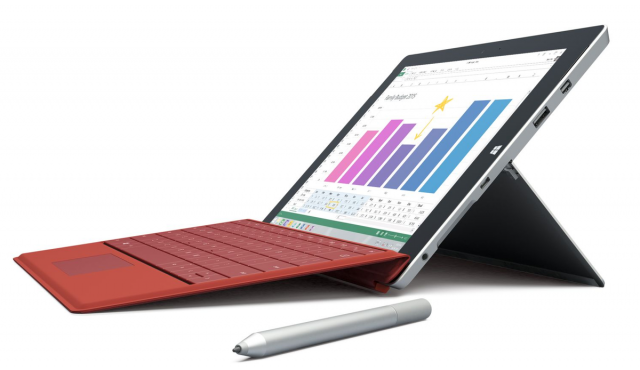 Microsoft has launched its new Surface 3 Windows tablet. It is billed as a device to replace your laptop. Here’s the rundown about its UK release date, specifications and price.

When does the Surface 3 come out?

Preorders can be made today at Microsoft Stores, microsoftstore.com and at some retailers. The Surface 3 will be on sale beginning 5 May with availability in 26 markets by 7 May.

“The 3:2 aspect ratio that we first introduced on Surface Pro 3 is also used here, and, like its larger sibling, it feels natural whether you’re holding it in portrait mode for reading or writing a quick note with the pen or in landscape mode to watch a movie or play a game.”

As well as the ClearType HD multi-touch display there are stereo speakers with Dolby Audio-enhanced sound. The Windows 8.1-based tablet has ditched Windows RT, meaning standard Windows applications, including Adobe’s Photoshop and Apple’s iTunes can be installed.

The 64-bit Windows 8.1 will also get a free upgrade to Windows 10 when it is released.

Every Surface 3 will also include a one-year subscription to Office 365 Personal, “including full versions of Word, Excel, PowerPoint, Outlook and OneNote as well as 1 TB of OneDrive storage.”

Unfortunately the stylus pen and keyboard ‘Type Cover’ aren’t included with the tablet and will cost users an extra £155.

The kickstand of the Surface 3 is limited to three positions, while the Pro’s kickstand can be angled at any position.