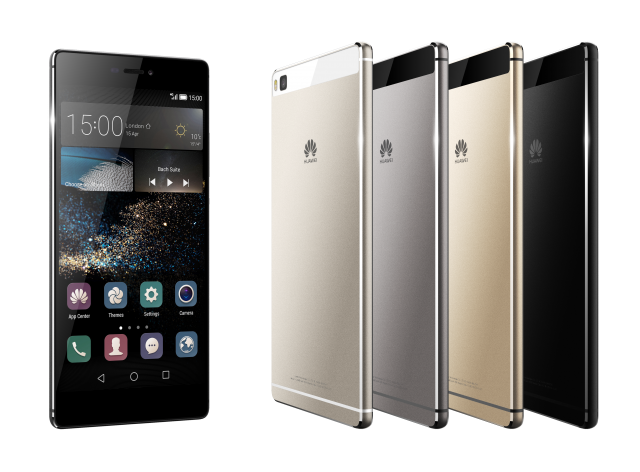 Huawei has launched its latest flagship smartphone, the Huawei P8, at an event held in London. We take a look at the phones specifications, pricing and availability.

The all-metal unibody design is about the thinnest premium smartphone, measuring just 64.mm wide. It sports a curved, chamfered edge the manufacturer said is inspired by “the pages, bindings and hardcovers of traditional books”. The phone comes with four colour options:  Mystic Champagne, Prestige Gold, Titanium Grey and Carbon Black.

The phone is powered by the firm’s own 64-bit 2GHz octa-core Kirin 930 CPU and 3GB of RAM. It said this chipset boosts performance by approximately 20 percent compared with other phones with similar levels of battery life. The device contains a 2680mAh battery.

The standard model will ship with 16GB of internal memory while the premium model sports 64GB of storage. Both can be expanded with a MicroSD card. The MicroSD card slot also doubles up as a SIM card slot for dual SIM capability.

The display is a 5.2inch 1080p display, which is surrounded by two 1.5mm-thin bezels. Its big brother, the P8max has a larger 6.8inch screen. Both sport a special nano-coating that makes the phone splashproof, protecting it against accidental damage. Huawei made a big deal about the camera in the phone. It comes with a 13MP rear camera with optical image stabilisation and the ability to rotate up to 1.6 degrees. The camera sensor can capture light in RGBW (red-green-blue-white) pattern, which supposedly helps the camera in the low-light.

There is a “Light Painting” mode that can capture a rolling ferris wheel at night, showing the circular streams of light in an artistic photo. Users can also “light paint” their own freehand pictures using a small torchlight in the dark.

The front 8MP lens, great for the self. In fact it has a number of selfie modes. The Perfect Selfie mode lets the user preset beauty modes and supports very fast face recognition. The Group Selfie mode is basically a panorama feature.

The P8 and P8max come with 4G LTE support and Wifi+, which allows you to auto connect Wi-Fi as well as auto hotspot at known locations. Roaming+ claims up to three times faster connectivity to a phone network.

The standard Huawei P8 has 16GB of storage and comes in Titanium Grey or Mystic Champagne. It costs 499 Euro (£357). The premium version has 64GB of storage and is available in Carbon Black or Prestige Gold. This model costs 599 Euro (£429).

Both standard and premium versions of the P8 and P8max are available.

It will initially be available in more than 30 countries including China, Columbia, France, Germany, Mexico, Spain, South Africa, Turkey, UAE and the United Kingdom.