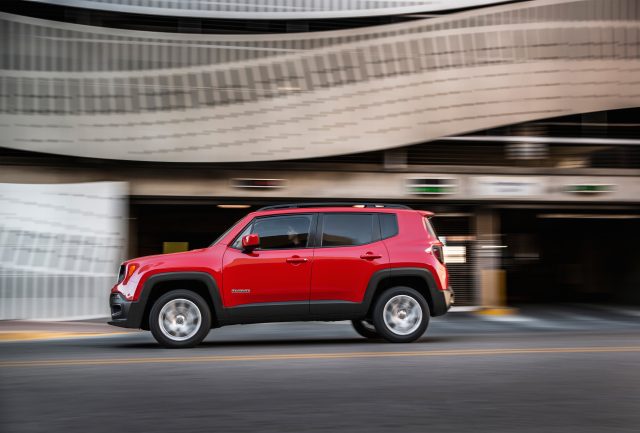 Small sports utility vehicles have been coming onto the market for a while. We already have the Vauxhall Mokka, The Nissan Juke, Audi Q3 and Renault Captur, so it was only a matter of time before Jeep launched its Renegade.

The car is a 4.2-metre mini SUV, designed in the USA that’s based on the Fiat 500X (the two share a platform and mechanical hardware). In fact, both are being built in Italy.

The Renegade comes with a choice of six petrol and Multijet diesel engines. Starting with the 138bhp 1.4-litre MultiAir2 turbo petrol, as well as amore powerful 168bhp version of this unit and two diesels. The 1.6-litre MultiJet II, at 118bhp or 138bhp, and a 2-litre MultiJet II in 138bhp or 168bhp.

Our test car was one of the Limited diesel versions. Cars such as these are more “The Only Way is Essex” rather than Bear Grylls.

We were given a bright orange version of the car, a kind of orange not seen on cars sine the 1970s. If you ignore this, then the car itself is quite good looking, if a little chunky. The distinctive tail lamps feature a vintage military gas can design, which is a nice little touch. Other Jeep touches include round headlamps, a grille with seven vertical bars and squared wheel arches.

The touchscreen menu navigation is easy to get through and understand. It is smaller than most of Jeep’s other vehicles but stands out from the Skoda Yeti. The boxy shape should mean more room inside and to a point that is correct. But this room is more headroom. Great it you are tall (and this writer appreciates that). But while the driver and front seat passenger get room, once you have three small children in the back the rear doesn’t seem so roomy after a while.

The central 6.5-inch touchscreen controls the Uconnect in-car entertainment. It boasts DAB radio, Bluetooth connectivity and satellite navigation. While these are standard Fiat parts, there’s enough of the Jeep character to bring the car alive. The touchscreen menu navigation is easy to get through and understand.

The boot is fairly square, although limited with space. The car also boasts two removable “My Sky” roof panels.

Once out on the road the steering is very responsive and quite nippy around corners. Parking is easy to do as it sports a quite tight turning circle. The engine didn’t seem overly noisy either.

One problem with driving are the boxy pillars that really cut down on visibility while on the move. One problem with driving are the boxy pillars that really cut down on visibility while on the move.

Maybe those pillars are there for safety. The Jeep Renegade boasts a five-star Euro NCAP crash test rating as well as safety aids such as lane departure warnings and collision avoidance systems.

As touched upon earlier, the touchscreen in the central console is where most of the car’s entertainment and information can be accessed. There are ports to plug in a smart phone or tablet and anyone with an iPhone or iPad will be able to control that from the touchscreen. There is also an Aux socket in case your phone cannot connect to the entertainment system. Bluetooth is the third way to connect devices to the stereo system. When connected this way, the driver can make and receive calls without danger. That Satnav is a Garmin-based one and is good in use and there is a great touch with directions popping up on the driver’s dashboard behind the wheel.

There are voice controls to select music input and volume as well as buttons on the back of steering wheel to control what you are listening to.

Overall the sound quality of the six-speaker audio system was good.

The car drove well and certainly one that would make the daily commute more enjoyable. It should undoubtedly appeal to those wanting to buy into the Jeep lifestyle. The All-new Jeep Renegade Limited starts from £16,995 on the road. (Update) – This review has been updated with more accurate price details.