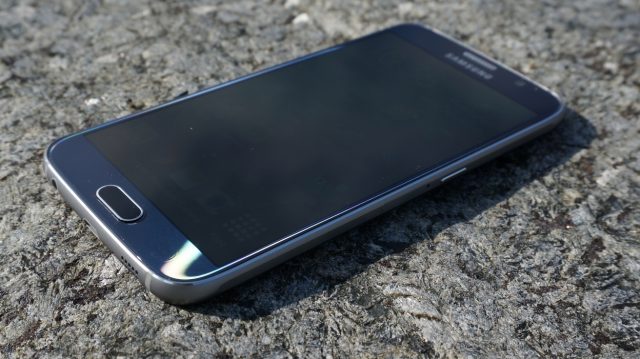 When we reviewed the Samsung Galaxy S6 nearly a month ago (original review below) we said it was our Android phone of the year, marred mainly by a weak battery. A few weeks in we’ve got several updates:

The battery life is still on the flimsy side, lasting just under a full day. Carrying a charger or a backup battery is pretty much a necessity.

The big news though is that our test phone has developed a screen sensitivity issue. It’s inconsistent, but basically the touchscreen doesn’t always respond as expected, sometimes requiring a very deliberate press instead of a light touch. We’re not alone, as this thread makes clear. Running the phone in ‘safe mode’ seems to clear the issue at least for a few days, and word is that firmware updates are imminent to help battery life and solve this screen issue. We’ll keep you posted.

Switch the phone into safe mode for a short period, then switch back. Safe mode is activated by turning the phone off, then holding power and volume down until the Samsung start screen appears, then releasing the power button retaining pressure on the down volume. After a few minutes tap the alert to return to normal mode.

Not only do we think the Samsung Galaxy S6 is the Android phone of the year so far, (see below for the full Samsung S6 review) but so do the phone-destruction testers at Squaretrade, who have created the smartphone ‘bendbot’ challenge video below. Needless to say, the Samsung won…

Samsung launched the Samsung Galaxy S6 at the MWC tradeshow in March 2015, and immediately several things were obvious – firstly, they’d listened to the customers who said design was important to them in a premium phone, and they also took notice of their increasingly bloated UI which had attracted plenty of criticism. So how does the actual phone add up? Is the Samsung Galaxy S6 any good?

Well, lets not beat around the bush: This is the best Android phone on the planet right now, sorry HTC M9, and is arguably ‘better’ than the iPhone 6, (at least until the iPhone 6S lands) although that’s a subjective shout at best.

Why? The full story below, but in short – the camera is awesome, the design is exquisite, the UI more muted (read adult) than previous versions, and the remaining technical gimmicks (HR monitor/Fingerprint reader/both PMA and QI wireless charging) actually enhance your experience, rather than detract from it. The Samsung Galaxy S6 has a 16MP sensor as the main camera, and a 5MP front facing camera, which by numbers alone are just about sufficient. However, the real trick Samsung has pulled off is a super-fast launch time (double click the home button or hit the camera icon on the home screen) and you’re in photo mode in fractions of a second. This speed is also carried over to the shutter button, which fires as fast as you can hit the button, making capturing that moment actually feasible, rather than the mobile phone freeze-fests we’ve become used to. Low light image capture is pretty stellar too, putting this camera in the top bracket… Design-wise this is a quantum leap from the plastic-y Galaxy S forbears, and has really catapulted Samsung back up the phone rankings. The HTC One M9 may just edge build quality, and the iPhone 6 might be slightly more desirable, but it’s into personal preference and endless debate. These two sheets of glass sandwiching an alloy band are as beautiful as anything else out there. In fact, side by side with an iPhone 6 the bottom edge ports are strikingly similar. After using the Samsung Galaxy S6 for a while we kept being reminded of the feel of an S2 – the vibrate frequency is the same, and the razor thin-but-quality feel too. At 6.8mm the S6 is as slim as you’d wish for, but the projecting camera lens does intrude on that. Not only does this expose the lens to scratches, but also means the phone doesn’t sit flat. However, apart from that niggle this is a welcome return to form for Samsung. Samsung has equipped the Samsung Galaxy S6 with a 5.1-inch display, with a resolution of 1440 x 2560 and a PPI of 577 – behind the figures this means it’s the sharpest display around, and in back to back comparisons looks like it. Although the figures are in its favour, in reality it’s hard to get excited about in everyday use. However, it’s not going to embarrass you down the pub. The big issue with this phone was always going to be the battery. After samsung announced at MWC that it would in fact have a smaller powerpack than the S5, the internet was immediately full of fear and doubt. Sadly, that smaller capacity has certainly performed as expected at launch, with normal usage cratering battery life before the end of a day. Hopefully we’ll see firmware upgrades to help combat this, but given the performance and screen quality it would be alchemy to have made this maths work out well. It’s a big blow for a premium handset, and the major issue with an otherwise brilliant phone. Finally android users can hold their heads (and hands) up in company with iphone users and claim biometrics actually work. Although the S5 claimed fingerprint recognition, it never really caught on and was just clunky enough in use to put you off. Samsung have totally changed that round with the S6. After registering your paws and setting up fingerprint recognition as an unlock option you’re set. A long press on the home button unlocks your phone. Thumbprints are entered on their side, which makes sense as soon as you try and unlock with a thumb. It fails once in a while, but less than one in 20, and that’s fine by us.

S health has been revamped too, stripping away the endless setup phase and getting you straight into tracking your activity and checking your Heart Rate via the rear flash.

Overall, the Samsung Galaxy S6 is our Android phone of 2015. If you’re in the market for one, may we suggest pairing it with the Best Wireless headphones on the market, the Sennheiser Momentum Wireless?