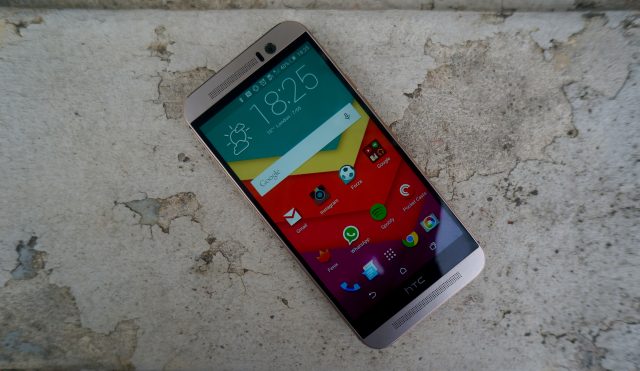 A lot changes in 12-months when it comes to phones. But, after using the HTC One M9 for a few weeks, we don’t feel like the Taiwanese company has moved on quite so much as some of its rivals, namely the Samsung Galaxy S6. Which is a real shame, especially as we’ve been rocking an HTC One M8 in our pocket since its 2014 unveiling.

In the year when Samsung went sexy, LG pulled on a leather jacket and the iPhone grew-up, why does it feel like HTC just hasn’t done enough? Find out in our HTC One M9 review.

Pick up any one of HTC’s last three major flagships and you’d be hard pressed to tell them apart on first glance. It all started with the One M7 three years ago, giving HTC a new design direction and putting the Taiwanese company right at the top of the pile when it came to crafting sleek, sexy and iPhone rivalling handsets.

HTC clearly feels it has hit the design nail on the head, as this year’s M9 sticks very close to the two predecessors that came before it. That isn’t to say everything is the same, though. Gone is the unibody build from the M8, with the M9 now constructed from multiple pieces of aluminium. This gives a sort of lip effect, making the sides protrude ever so slightly from the front. The rear is now brushed aluminium and its slightly move curved than before, helping the device sit better in your hand. We found the M8 often dug a bit too hard into our hands, so the slight changes this time around are definitely appreciated.

One change we’re not so keen on is the moving of the standby button from the top to the side. Now, with large screened phones, such as this, sticking the power button on the top is a no go. But HTC has decided to put it right in the middle of the side, directly under the volumes keys. Bad move. Having it so low is far from natural and we constantly hit the volume buttons by accident. It’s infuriating. It seems even stranger having all the buttons on the right side, why not shift the volume rocker to the other side and makes things a little less confusing.

Flip the device over and the front is dominated by a 5.2-inch display, the same size as the M8, flanked by HTC’s iconic Boom Sound speakers. While the addition of these stereo speakers create one of the longest phones on the market, we’re glad they’ve been kept around. Audio sounds great – whether it’s from Spotify, YouTube or even just you morning alarm. Trust us – when this thing starting beeping in the morning, you’re going to wake up. Colour options are also a tad more varied this time around, down in part to the multi-piece design. Our review unit was silver, with a rather garish rose gold trim. Unless you’re particularly fond of that hue or want a device that has a whiff of bling about it, we’d advise sticking to the more traditional choices. The all-black look is far more attractive, as is the two-tone silver one.

Sense is starting to fall behind

HTC’s Sense UI overlay was, for a long time, one of our favourite aftermarket Android skins. Yes, it didn’t quite match the beauty of stock Android, but it did the job.

But, in a time when many brand’s are dialling back the amount of changes they make to Google’s operating system, HTC’s approach is starting to feel a bit old-fashioned. It feels like no part of Android 5.01 Lollipop has been left alone here. The notification panel has been ruined with a messy quick settings screen, the app drawer is an odd scrollable list that makes finding the thing you want tricky and the widget picker is just downright confusing. Thankfully, you can swap from HTC’s multi-tasking view to the stock Lollipop version in just a tap.

Sense 7 looks, on the whole, largely the same as Sense 6 on the One M8. There’s a new homescreen widget that’s supposed to intelligently alter the apps it shows depending on whether you’re at ‘Home’ ‘Work’ or ‘On the Go’, but all this really did was show Netflix instead of a note taking app when we got home in the evening. HTC has also bundled a very annoying ‘Suggested Downloads’ folder that populates with Google Play apps it thinks you’ll like. No thanks HTC, we don’t need these suggestions on our homescreen.

Blinkfeed – HTC’s hub of your social networks, news and so-on – has also been spruced up. There’s a load of news sources you can pull, support for Instagram, FB and Twitter amongst other services and it even serves up handy suggestions on where you could eat lunch. You can easily disable it completely, but we found it quite useful this time around.

Easily the biggest upgrade to Sense this year is the completely new, and very impressive, system-wide theming engine. These themes completely change the look of the software – from icons to fonts and background colours. It’s great. There are a load to download and you can make your own as well. While many are a little bit ‘in your face’ for our liking, there a few that change Sense for the better. Plenty of power under the metal

3GB RAM, Snapdragon’s 810 chip, 32GB of internal storage plus a MicroSD card slot to improve that further – HTC has picked all the top specs and jammed them into the M9. All that power equates to a phone that really does, pardon the cliche, fly. Swiping, scrolling, pinching and whatever else you do is all done smoothly and quickly. We suffered barely any lag at all, which when you consider the specs shouldn’t really come as a surprise.

Intensive games – Dead Trigger 2, Asphalt etc. – were all played with ease and even when lots of apps were open, performance never seemed to be effected.

We did notice, however, that the metal body got really hot when gaming or charging. Hot to the point where we felt something wasn’t right. But, it never seemed to effect the device.

Call quality on the M9 was as good as expected. The BoomSound speakers do make loudspeaker chats that extra bit crisper though, so that’s plus. We did all our testing with a 3 UK 4G sim, so data was snappy in LTE areas.

Why no 2K display?

All the specs packed into the M9 are top-of-the-line, apart from one thing – the screen. In a world where Samsung, LG, Motorola and many others have all kitted their latest devices out with QHD 2K displays, it seems strange for HTC to stick with virtually the same panel it used last year. Granted, 1080p displays are still great and the M9 is no exception, but a cutting edge device that is going head-to-head with other flagships sporting the uber high-res tech is always going to fall down somewhat.

The panel on the One M9 is still good though. It’s sharp, bright and perfectly viewable outdoors. Viewing angles are superb, tilt the device any way and you’ll be hard pushed to find any glare. But, and it’s a big but – put it side by side with the Galaxy S6 and Samsung’s best phone in years storms out into the lead.

There’s enough grunt under the hood to power the extra pixels, we’re sure, and the battery life doesn’t seem to have been greatly increased by the decision to stick with 1080p. We’ve still been plugging in every night and hitting the red by the end of the day. Ultrapixels weren’t great, but this….

If there was one area that we’d guess everyone wanted to see improved this time around, it would be the camera. The 4 Ultrapixel sensor that sat on the back of the M8 was one of the real disappointments on a device we otherwise loved.

Gone, on the back anyway, is the whole idea of Ultrapixels. Instead you’ve got a Toshiba sensor, boasting 20.2 Megapixels and the ability to capture 4K video. HTC has managed to do something quite incredible – finally put to bed the argument that increasing the megapixels doesn’t actually give you better snaps.

We’ve been using the M9 for a few weeks now and in that time have really struggled to take a great shot without spending precious seconds altering settings and getting everything ready. It’s a pain. With the iPhone 6 or Samsung Galaxy S6 you can pull out your phone, open up the Camera app and snap of good-looking photo, that just isn’t possible with the M9.

So, what’s the problem? Well, pictures always come out over-exposed. Light blows out your shot, leaving you with rather useless daytime snaps. If you’re out of direct light things look a little better, detail certainly isn’t an issue, but colours are often inaccurate. Low-light shots are middling too, due to the lack of optical image stabilisation, and much worse than you’d be able to achieve with the Ultrapixel shooter from the M8.

Shooting with this M9 is just, well, frustrating. We haven’t used a phone camera in quite a while that requires so much effort to take a great picture.

Video doesn’t fare much better. 1080p footage is fine, if a little shaky, while stuff shot in 4K is almost unwatchable due to frame-rate issues.

The only positives comes from the great, manual camera options in the app. If you’re a selfie lover (and in this day and age, who isn’t?) the Ultrapixel sensor from the M9 has made a trip to the front and manages to take adequate snaps on your face, especially in low-light.

The camera, in truth, is a big disappointment.

The main qualms we had with the M8 were the camera, the over-bearing software and the slightly sharp build. HTC hasn’t really fixed any of these, aside from make it slightly curvier. We had no problems with the speed last year, yet the biggest upgrade this time seems to be beefing up the processor and putting in an extra 1GB RAM.

Last year HTC also had well and truly the best looking Android device going. This year though, the story is not so clear. Samsung’s Galaxy S6 is metal, glass and gorgeous, the LG G4 has a premium leather back and even Motorola’s Moto X combines a luxury finish with a sturdy metal build. No longer is HTC the king of Android style.

It’s also slipped further behind in terms of software, even though Blinkfeed and the impressive theming engine are nice additions. With Samsung and LG cleaning up their skins and Motorola sticking to stock Android, Sense 7 feels heavy and bloated.

If you do pick up an HTC One M9 you’re still getting a beautiful and fast phone, though with being much cheaper we would probably say you’re better off picking up the M8.