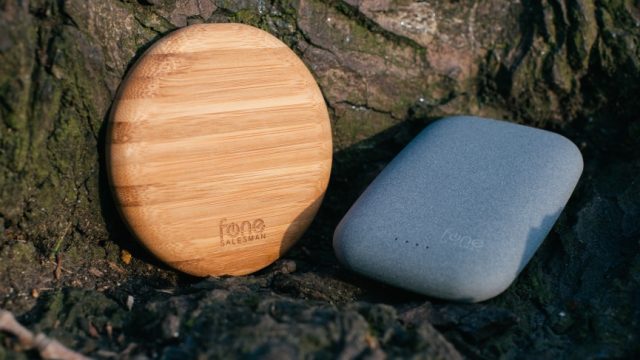 Wireless charging is a big thing with Windows Phones and Android-based devices, but is sadly missing from the iPhone. Fonesalesman hopes to change this with a little gadget that plugs into the phone’s Lightning port.

Fonesalesman do two types of chargers; the WoodPuck charger, which is made from bamboo, and the Qistone+ Wireless Power Bank, which has a zen stone look.

The Woodpuck is made of tortoise-shell bamboo (also known as Mao Zhu bamboo). It looks rather like a drinks mat, but you place your phone on it to charge.

The Qistone+ Wireless Power Bank looks like a stone. Inside it has a built-in 4,000 mAh battery, so it can wirelessly charge your phone without using any wires itself. Four LEDs on the front let you know how much battery is left. The Power Bank also has a wireless charging receiver of its own, so when that runs out of juice you can place it on another wireless charger to recharge it. It can also charge up via USB.

As for charging, both work really well. Our Samsung charged up just fine and our iPhone 5S, which had an iQi receiver attached to it, worked without any problem. This receiver works with any lightning equipped iPhone 5/5C/5S, 6, 6 Plus or 5th generation iPod Touch.