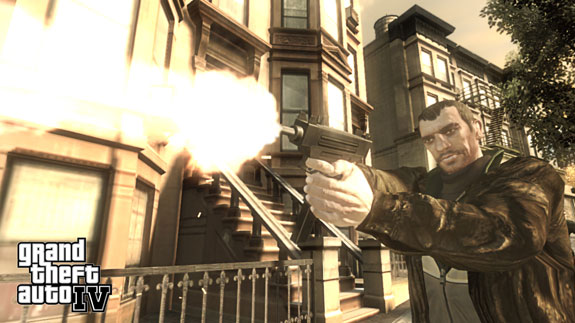 One of the more intriguing telly events of the coming year is Game Changer, a one-off drama focusing on the creation of the Grand Theft Auto series. But now Rockstar has got its lawsuit on.

Game Changer, which started filming in April, is a 90-minute drama due to be shown as part of a season on coding on the Beeb later this year. Written by Rev co-creator James Wood, it’ll star Daniel Radcliffe as Rockstar co-founder Sam Houser and Bill Paxton as gaming’s late-90s-mid-00s nemesis, Jack Thompson, the notorious lawyer who tried to sue anyone who looked at him funny until he got disbarred for twenty-seven cases of professional misconduct in 2008. (Our personal favourite Jack Thompson story is when Thompson, in 2005, challenged developers to make a game to his exact specifications involving the mass-murder of gaming developers and E3 show-goers, promising to donate $10,000 to charity if the game was made. The game was made and he refused to honour his agreement, claiming it was satirical. Jerry Holkins and Mike Krahulik, of gaming comic Penny Arcade, donated the sum in Thompson’s place, which prompted Thompson to accuse the pair of harassment.)

However, despite filming being well underway Rockstar has apparently now developed issues with the project and launched a lawsuit.

“Take-Two Interactive has filed suit against the BBC for trademark infringement based on their movie currently titled ‘Game Changer’ as it relates to Rockstar Games’ Grand Theft Auto video game series,” a Rockstar spokesperson said.

“While holders of the trademarks referenced in the film title and its promotion, Rockstar Games has had no involvement with this project. Our goal is to ensure that our trademarks are not misused in the BBC’s pursuit of an unofficial depiction of purported events related to Rockstar Games.

“We have attempted multiple times to resolve this matter with the BBC without any meaningful resolution. It is our obligation to protect our intellectual property and unfortunately in this case litigation was necessary.”

Exactly what’s riled Rockstar is anyone’s guess – we’re presuming the production wanted to use some footage of GTA gameplay and since the drama’s an unofficial retelling problems arose. We can’t really see production being shut down at this point, but given Paxton’s involvement we’ll leave you to make your own “Game over, man!” joke.