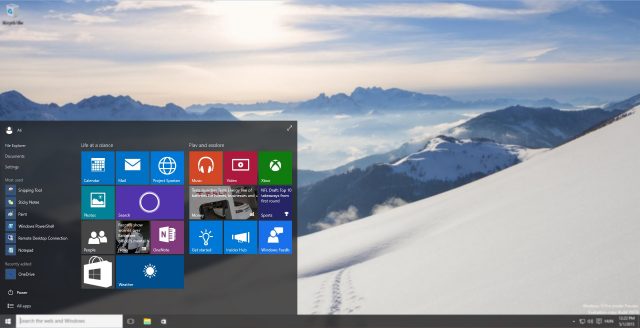 (UPDATE) Microsoft has announced that Windows 10 will be available beginning July 29  in 190 markets globally as a free upgrade to customers running Windows 7 and Windows 8.1. Consumers will have one year from July 29 to take advantage of the free upgrade.

Once a Windows device is upgraded to Windows 10, Microsoft will continue to keep it current for the supported lifetime of the device—at no cost. Those who want to be among the first in line for the free Windows 10 upgrade can reserve a free copy in the coming weeks, according to Microsoft.

With Windows 8 and Windows 8.1 being variously successful, Windows 10 was never going to be too far away. Here’s everything you ned to know about when Windows 10 is released, its price and new features.

Last ever version of Windows?

Microsoft has confirmed that Windows 10 would be the last major release of the operating system. That does not mean that It will stop selling the OS, rather in future all updates would be like that of Mac OS X.

In a statement issued by the company to the Verge, Microsoft said would continue to be a “long future of Windows innovations”.

“Recent comments at Ignite about Windows 10 are reflective of the way Windows will be delivered as a service bringing new innovations and updates in an ongoing manner, with continuous value for our consumer and business customers,” said a Microsoft spokesperson.

There are general UI improvements throughout including a new Live Tile animation on the Start Menu. Continuum gets the simplified taskbar and there are improvements with multi-tasking with Alt-Tab, Task-View, and Snap Assist.

There are also updates to Music, Video and Xbox Apps and Windows Store Beta, now with the Blue tile, has been expanded to 41 markets.

Windows 10 has been pencilled in for the summer of 2015, but AMD CEO Lisa Su let slip that the new operating system would be released late July. She made the remarks at the company’s quarterly earnings call. Although it is unknown as to whether she was referring to its release to manufacturing or general availability.

“What we also are factoring in is, with the Windows 10 launch at the end of July, we are watching the impact of that on the back-to-school season, and expect that it might have a bit of a delay to the normal back-to-school season inventory buildup,” said Su, according to Kit Guru.

What will it cost?

Microsoft’s Terry Myerson said that Windows 10 would be free for Windows 8.1 users but only uring the first year of its release. The situation for Windows 7 users is a little less clear. Microsoft had confirmed that he two most recent versions of Windows would get a free upgrade but whether that means Windows 7 or Windows 8 is anyone’s guess.

Surprisingly, Windows 10 will be free to users of the Raspberry Pi 2.

However, enterprise customers won’t be getting the free upgrade.

“Windows 7 Enterprise and Windows 8/8.1 Enterprise are not included in the terms of the free Windows 10 upgrade offer we announced last week, given that active Software Assurance customers will continue to have rights to upgrade to Windows 10 enterprise offerings outside this offer, while also benefiting from the full flexibility to deploy Windows 10 using their existing management infrastructure,” said Jim Alkove, director of programme management, in a blog post.

Where it will be available

According to reports from Microsoft’s WinHEC conference in China, Windows 10 will launch in 190 countries and 11 languages.

Earlier this year at a Microsoft event, the firm unveiled Windows Holographic and HoloLens, an augmented-reality headset. Microsoft demoed potential use cases such as exploring a virtual Martian landscape and architects planning and modelling new buildings.

The virtual personal assistant Cortana (first seen in the Xbox game Halo and latterly on Windows Phone) comes to Windows 10 and sports a raft more functionality to boot. The AI learns about the user over time and uses this to remind them of upcoming events in the calendar.

It will also give users extra information when browsing the web using Microsoft’s new Spartan browser.

The browser, formerly known as Project Spartan, has a stripped-down look and features Cortana voice commands and website annotation. It also sports a new tab page that shows both other websites as well as info such as weather.

Microsoft is going to great lengths to bring users from other platformas and will be offering to make it easier for developers to port extensions from other browsers, such as Chrome and Firefox.

Edge also sports a number of improvements over IE as well as added functionality. Reading Mode allows users to save a page for reading later.

IE will still be hanging around in the present Windows 10 Technical Preview build 10041.

Universal Apps will run on Windows 10 for desktop, mobile and tablet. It is also thought these apps will run on Xbox One. A unified app store is set to arrive with Windows 10 with developers able to create apps that will run across all Windows devices.

Running apps from Android and iOS

Microsoft is set to release software tools to enable developers to port Android and iOS apps over to Windows 10.

Dubbed Project Islandwood, iOS developers could make an app for Apple devices and then by changing a few lines of code, make them run on Windows 10 as well. Pumping code through an interpreter would also be necessary, Microsoft said in a presentation at its Build developer conference in Seattle.

Project Astoria is aimed at getting Android apps working on Windows. This would look for Android apps and giving it the responses it is looking for in order to run.

Windows 10 within a network of computers will use hose computers as a peer-to-peer network to download updates quicker.

The return of the Start Menu

Windows 10 sees the proper reintroduction of the Start Menu (well you could use a third party app to bring the Start Menu to Windows 8). The Start Menu mixes elements of the old program menu and Windows 8 tiles. The menu is customisable, tiles are resizable and items can be pinned or unpinned to it.