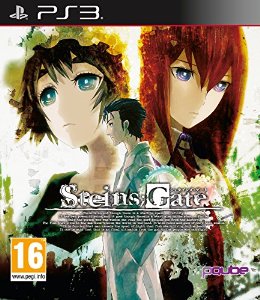 Appropriately for a game about time travel, Steins;Gate has taken its own sweet time getting here. It’s arrived on UK shores some six years after its Japanese release, with the result that most people, on exposure to its strangely-punctuated name, will likely think of the acclaimed anime adaptation first and may not even realise it was a game in the first place.

The lengthy delay is understandable, though. Steins;Gate belongs to that genre of games that falls just below “girlfriend simulator” or “train driving game” in the pantheon of Incredibly Japanese Games – it’s a visual novel. Such things were never even considered for European release not that long ago, and those that were diluted their visual-novel-ness with extra gameplay – Capcom’s Ace Attorney series, with its point-and-click crime scenes and courtroom battles, for instance, or Spike Chunsoft’s Zero Escape titles, with their elaborate puzzles to break up the chatting. (And even then, only the most recent of the ZE games, Virtue’s Last Reward, made it to the UK, with its prequel just getting as far as the US).

But the fact that Virtue’s has been hanging round near the top of the Vita’s download charts for yonks, added to the similar relative success of the Danganronpa series, has apparently convinced Sony that a worldwide release for one of the most influential and well-regarded of all visual novels would be worthwhile. And if your only experience of the genre is via halfway houses like the above-mentioned titles, you’re in for a bit of a shock.

Steins;Gate is admirably forthright in being a visual novel in the most literal sense – it’s almost entirely a book with voice-acting and static images to look at. The “gameplay” is limited to fiddling with protagonist Rintarou’s phone, reading texts from his friends and choosing whether to respond to them, as well as choosing whether to answer or ignore incoming calls. Whether you reply – and how you reply (most texts have two or three different response options) – directs you to one of six endings. That’s all you do.

Given your lack of input, you’d hope this’d be a heck of a narrative to invest in. Happily, it is, as partially evidenced by the fact they made an anime out of it (incidentally, we here at Absolute Gadget have heard of said anime’s high reputation, but not actually seen it. If you have, bear in mind it follows the game’s “true ending”, but the alternate endings should not be discounted as half-hearted variations).

Steins;Gate’s plot revolves around Rintarou Okabe, a university student who spends his spare time coming up with oddball inventions. He’s currently working on a microwave you can control via your mobile phone, but it’s producing increasingly odd results, culminating in his somehow sending a text message a week into the past. This has resulted in time being rewritten, and only Rintarou is aware of the changes. Given that the original timeline – the one that resulted in the composing of the fateful text – saw Rintarou’s acquaintance Kurisu murdered and this new one has seen a satellite crash into the same Tokyo building where the murder took place, it behoves Rintarou and his friends to try and work out just what’s going on.

While the plot is an entertaining pile-up of sci-fi standbys, the game’s real victory is its characters. Most of them draw from the sort of stock personalities anyone who’s encountered Japanese media will be familiar with – the overweight hacker, the ditzy girl obsessed with cuteness – they’re filled out enough to feel real. The exception is Rintarou himself, who’s so distinctive he instantly becomes one of gaming’s great protagonists. He’s cultivated a “mad scientist” persona for himself, complete with his “true name”, an evil laugh and a lifetime spent on the run from the mysterious Organisation. Thing is, the game is deliberately vague about whether Rintarou is genuinely suffering from some sort of personality disorder or if he’s just doing it to wind everyone up. Given that visual novels generally cast you as an everyman, for obvious reasons, it’s a nice change to play as a distinct character for once, using the “unreliable narrator” trope to the fullest.

It’s a bit of a shame he doesn’t have a more exciting world to inhabit, though. Visual novels are typically basic to look at, and while Steins;Gate has some nice artwork, a little more animation wouldn’t have gone amiss. Things look a bit sparse and lost on the big screen, and we suspect the PS Vita version (which we haven’t had the opportunity to try) will fit the game better. An additional niggle is responding to the texts you’re sent is hit-and-miss – certain words are laid out like hyperlinks, and clicking on one composes a response. The problem is, you have no idea what tone the response will be in, or indeed exactly what Rintarou will choose to talk about, until it’s sent. Given that it’s the most input you have in the game, it’s frustrating that it’s so vague.

It’s hard to stay disappointed in Steins;Gate for long though, and before long you’ll be thrilling to another twist, surprised to find you’re actually learning some fairly complex physics as Rintarou attends a lecture on time travel, or laughing at a perfectly-pitched joke riffing on The Legend of Zelda. Steins;Gate took its time to get here, but if you can put up with its idiosyncrasies, you won’t begrudge it the wait.

Steins;Gate is out now for PlayStation 3 (version tested) and PlayStation Vita, as boxed copy or download. A version for iOS is planned.