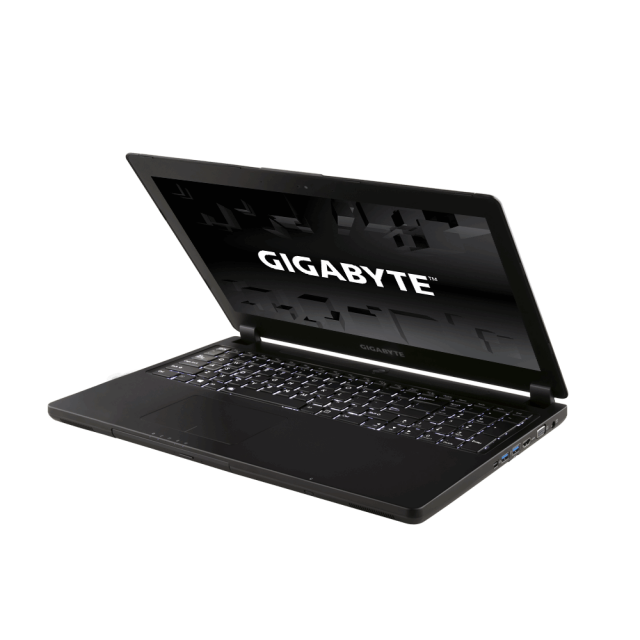 Gaming on a PC or laptop used to be the preserve or those that could afford it, but for hoi-polloi, just a distant dream. However, Gigabyte wants to change this with its P35K v3 laptop. But will it cut too many corners?

A lot of the gaming machines we’ve looked at in the past have been rather eye-catching, some eye-wateringly so, however, the P35K v3 isn’t one of those. Yes it’s thin(-ish), but not at all stand out for a 15.6-inch laptop. The gray and black do not make it stand out; which can be a good thing (theft-wise) or a bad thing (lack of bragging rights)

Opening up, there is a large bezel around the screen. We wish that laptop makers would use this space for screen instead of plastic that does nothing to heighten the gaming experience.

The exterior has aluminium panels so can withstand the rigors of daily use on the tube. On the underside, this is made out of plastic instead of metal, which would have helped with keeping the laptop cool. However, it does colour match the rest of the machine, so there is that. The front of the laptop sports an ultra-thin drive bay, which can house a disc-drive or additional hard drives. This can be removed if necessary to cut down on weight.

The full-sized keyboard is good with decent amounts of travel on the keys. The trackpad feels good in use; it is wide but not particularly tall. But gamers will want to use their own mice instead.

The Dolby Digital Plus home cinema set up sounded great, giving games strong atmospherics and great surround sound to immerse you in a game. The Gigabyte P35K v3 weighs in are 2.3kg and measures 385 x 270 x 20.9 mm, so a really light gaming laptop. There are virtual surround speakers, while external monitor aficionados are especially well-catered for with VGA, HDMI and 4K-friendly Mini DisplayPort lined up on the right-hand side of a case.

The graphics card makes this laptop worthy of consideration when paired with the Core i7 chip and 8GB of RAM. The Gigabyte P35K v3 (catchy name) uses Nvidia’s latest base-level GPU, the GeForce GTX 965M.

What lets it down is the SSD. With 128GB to play with, the OS and your games will soon fill this out. Admittedly there is also a 1TB for storage as well, but this means that games stored there will take longer to load up.

The performance was good, although after an hour of solid gaming and hot air coming out out the grills underneath, we noticed that the frame rate started to suffer a bit so we took a break while the laptop had a breather. Good thing really, get to see the outside world a bit, interact with other people, that sort of thing.

For around £1,000, the Gigabyte P35K v3 offers a lot of gaming for the money and portability to boot.