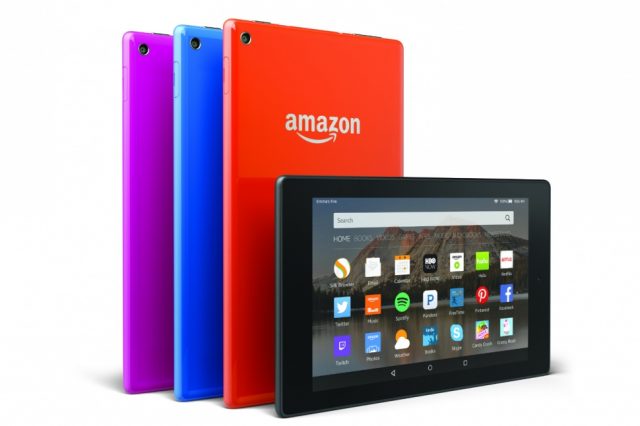 Amazon has launched a few tablets in the run up to Christmas as well as a 4K-capable TV set-top box.

The new 7-inch Amazon Fire sports a quad-core processor, 7in IPS display, front- and rear-facing cameras and up to 128GB of expandable storage.

The online retailer also said that customers could get a bulk buying buy five get one free for £249.99.

“The all-new Fire features a quad-core processor, is incredibly durable, and is backed by the Amazon content ecosystem, the new Amazon Underground, and Amazon customer service with Mayday Screen Sharing. Fire sets a new bar for what customers should expect from a low-cost tablet.”

The firm said the iPad rival has “the best display of any tablet in its price class” and added that  “unlike other low-cost tablets that use TN displays, Fire’s 7in IPS display offers a great viewing experience with vivid and accurate colour reproduction that can be seen at all angles.”

The low-price tablet packs a quad-core 1.3GHz processor, which Amazon claims makes it twice as powerful as the Samsung Galaxy Tab 3 Lite and twice as tough as the iPad Air. The tablet runs the latest Fire OS codenamed Bellini.

It also launched a couple of higher-end slabs; the Fire HD 8 and HD 10, with 720p 8in and 10.1in screens respectively. The new tablets are thinner at 7.7mm thick, and lighter than Amazon’s previous tablets.

Amazon Fire TV offers over 3,000 channels, apps and games which, according to the retail giant, is more than Apple TV, Roku, Chromecast, or any other streaming media player. It comes with 8GB of on-board storage, but this can be boosted by another 128 GB via microSD.

“The battle for the home continues to intensify among the leading online giants, especially for the living room. As Amazon launches its new Fire TV, 4K support will give the company early mover advantage in a cut throat and increasingly competitive market,” said Paolo Pescatore, analyst at CCS Insight

“Awareness of 4K in the UK is growing strongly with the launch of BT Sport’s ultra HD 4K sports channel. Amazon Fire TV’s new features coupled with a strong content offering elevates it over rivals. However, the lack of Now TV in the UK is noticeable and must be addressed.”