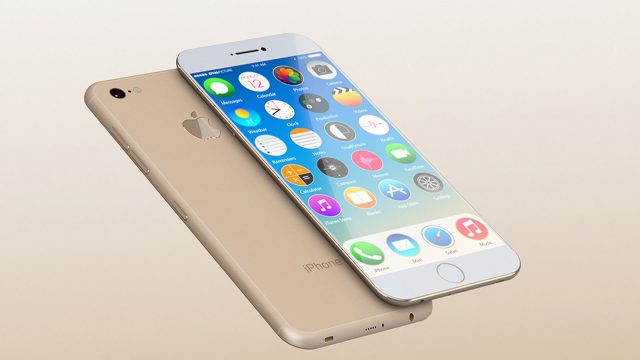 The iPhone 6S has been around for a good few months, but Apple fans are eager to know what will happen this autumn and the possibility of Apple launching what is expected to be the iPhone 7.

At this stage of the year, there is more rumour than solid fact. What we can assume is there will be a new design, more power and new features (possibly borrowed from other phone platforms).

We’ve collected all the rumours we can find and figure out which ones are possible and which are a tad outlandish.

15/01/2016: Apple could be giving the iPhone speakers a makeover. According to 9to5Mac, Apple’s latest patent describes how a thinner smartphone will need a more innovative audio system.

This effectively turns internal component of the iPhone in parts of the speaker. This would allow more air to be pushed through the device and increase the volume.

Apple has got into releasing a new iPhone or speed/feature bump every year, sometime in the autumn (or fall if you are reading this in the US). The most likely month is September. We’ll know for sure once invites go out to favoured journalists.

However, according to Apple Insider, the iPhone could make an appearance much sooner. The publication quotes a “reliable source” for the information. This may make some sense as sales of the iPhone 6S have slowed down despite it selling like hot cakes when released last year.

While there is negligible difference between the iPhone 6 and iPhone 6S, the iPhone 7 would make a change in looks. What those looks will be, remain to be seen and we shall update this as and when more details emerge.

One possibility, according to Ming-Chi Kuo, a KGI Securities in a note to investors, the new iPhone is predicted to be between 6.0 and 6.5 millimetres thick. The Samsung Galaxy S6 is only slightly thicker at 6.8mm. We believe that this could hit battery life unless Apple comes up with some crazy new features to keep power consumption to a minimum.

This diet could spell the end of the 3.5mm headphone jack on the iPhone 7. According to Japanese blog Macotakara, ditching the headphone jack could shave off millimetres. Users would listen to music via Bluetooth headphones or via the Lightning port.

The same blog also believes that the iPhone 7 could be waterproof and dustproof in a bid to make the smartphone more ruggedized.

We could see a big jump in screen resolution on the iPhone 7. According to DigiTimes, Apple may be switching to ultra-thin G/G touch technology for its iPhone in 2016. It said that manufacturers have already begun sending samples of fully laminated G/G technology to Apple and Corning along with Asahi Glass have also reportedly sent glass samples.

These panels could allow Apple to go bezel-less as in-cell touch panels (used on iPhones currently) reportedly are struggling with touch sensitivity on the edges. In-cell panels also make higher resolutions difficult, hence the move to the new technology.

French blog NoWhereElse and shows the panel from the iPhone 7 compared with the iPhone 6S.

The new iPhone 7 could also switch from LCD to OLED, which is used by Samsung on most if its smartphones. Again, DigiTimes reports that Apple is telling its supply chains that it will use OLED in future iPhones.

An Apple patent could be a clue to the whole display being one great big Touch ID fingerprint sensor. This could finally see the end of the home button and allow an even bigger screen.

It does seem likely that an A10 chip with six cores will be the centrepiece of any new iPhone. But an increase in memory, while welcome, is a long shot. Apple has only increased this when it has become absolutely necessary.

When the iPhone 7 gets launched, we should expect to see iOS 10 make an appearance at the same time. As with previous iOS launches, the OS will allow the new phone exclusive features that won’t be seen in older iPhones.

While the iPhone 6S bumped up front and rear cameras, it is unlikely that there will be more megapixels on any new camera for the iPhone 7. That said, there could be some software tweaks to boost picture quality.

A bigger battery also seems unlikely to appear on the iPhone 7. With the phone being slimmed down, less battery capacity seems very likely. Again, we expect some nifty hardware and software tweaks elsewhere in order to keep battery life in the same league as previous iterations.

The iPhone 7 could sport a reversible USB cable so you no longer have to worry about which way you plug the cable in when charging.

The new iPhone 7 could get an e-SIM. This could mean the end of having to wedge a small piece of plastic in the side to allow the phone to make calls and use mobile data. This would also allow the device to slim down or add more battery capacity. This would also make it easier for users to switch carriers and roaming more flexibly.