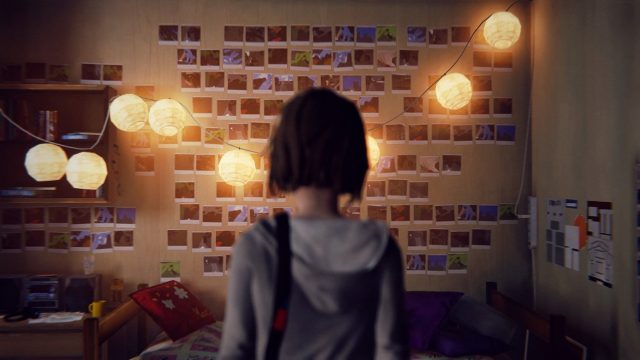 Teenage years. An often excruciatingly awkward period of your life where you might frequently find yourself wishing you had a rewind button to retry more embarrassing conversations. But what if you got exactly that?

Dontnod’s episodic adventure Life is Strange is not really a new game, having been released in five parts between January and October last year. But now a boxed retail version has been offered up, allowing those who haven’t yet visited the small Oregon town of Arcadia Bay an opportunity to see if they can live a teen girl’s life better with judicious editing.

Life is Strange casts players as Max Caulfield, who has returned to her town of birth after several years in the big city to attend a photography course at Arcadia Bay’s exclusive academy. A shy geek lacking the worldliness she hoped to acquire in her years away, Max’s somewhat insular existence takes a sharp left turn when she sees a fellow student accidentally shoot a girl. In a desperate attempt to help, she somehow rewinds time to several minutes before the incident and is able to save the girl’s life. Suddenly, she finds herself able to rewind time by a few minutes at almost any moment, allowing her to, say, get a question her teacher asked her right, warn a friend she’s about to get thunked by a flying football, or investigate the case of a girl who went missing several months ago…

The game’s an adventure game of both old- and new-school. Multiple-choice conversations of the sort that Telltale Games has based an entire portfolio of titles on the feature, but unlike Telltale titles they’re not timed and, since you can rewind time repeatedly until you land on a result you’re happy with, slightly less important than in those games. Linking them are more traditional puzzles of the sort you used to get in typical point-and-clickers, albeit more restrained than in LucasArts’ or Sierra’s more outré offerings. Get some obnoxious rich girls to move away from the entry to the dormitory by rewinding time to fiddle with sprinkler systems and paint cans, etcetera.

The key thing here is the time-rewind mechanic, which has a limited range and can also trigger that most beloved of time-travel explanations – the butterfly effect. Certain actions will trigger an animated butterfly in the corner of the screen, letting you know that what Max has just done will have a significant impact at some point later in the game. While some are self-evident – whether or not to tell the principal you just saw a student waving a gun around – others are more mysterious. What possible effect could writing “clean me” on a dirty car have on Max’s future? One way to find out…

The sci-fi veneer of this time-rewind mechanic is arguably of less importance to the game as a whole than you might think. Life is Strange is much more concerned with the minutiae of being an adolescent and largely presents its themes well. The somewhat awkward teen-speak has been lambasted since the first episode launched and it is occasionally corny, but it improves as the game progresses and the good voice cast do their best with it. Max and her peers can come off as trying a bit hard at times – Max is such a hipster that she takes her photos with a vintage Polaroid and squeezes in references to her favourite films whether the situation justifies it or not – but what is being a teenager but trying too hard at times? The game, in casting players as an atypical gaming heroine, deserves praise for tackling themes not often seen in gaming, from casual drug use to cyber-bullying. It may not always get things right, but when it works Life is Strange is a wonderfully judged title.

As far as the more basic question of how well it hangs together as a game goes, Dontnod has made up for its promising but ultimately disappointing debut, 2013’s Remember Me. The soundtrack, a mixture of licensed tunes and original composition, is excellent, and if the graphics sometimes come across as a little basic, they’re usually rescued by beautifully-deployed lighting, casting an atmospheric glow across proceedings. The core gameplay is inherently pleasing, nicely linking between point-and-click’s traditional puzzles and the genre’s more recent drift towards conversation-based gameplay, and while the characters are sometimes easy to ridicule, they’re genuine enough to cause you to form attachments – we’ve found ourselves avoiding the opportunities to rewind time when chatting to Max’s friends as opposed to her antagonists, as manipulating her friends feels vaguely like cheating.

The boxed copy adds in a director’s commentary as well as a small but nicely-made artbook presented like Max’s journal and an excellent CD containing the soundtrack. Unfortunately, it’s only available for the PC, PlayStation 4 and Xbox One versions – 360 and PS3 players will have to stick with the download version.

Overall, Life is Strange can occasionally come off as a bit overbearing, but it’s rarely less than a thoroughly enjoyable adventure. If you’ve yet to meet Max and co., this handsomely packaged boxed version is the ideal way to do it.