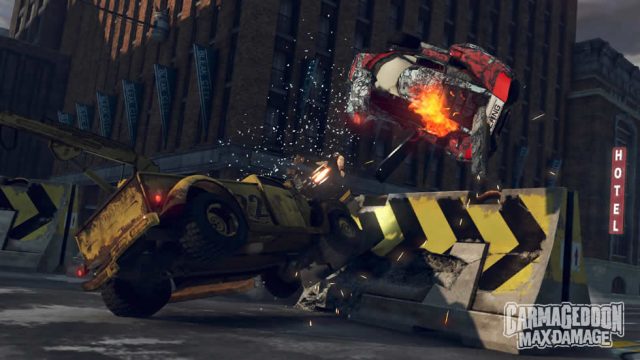 Back in 2012, Isle of Wight developer Stainless Games launched one of the first major Kickstarters to revive a classic gaming franchise. Carmageddon Reincarnation subsequently released on PC last year – and now the series is Xbox One- and PS4-bound.

Carmageddon: Max Damage, announced yesterday, is due to land on consoles sometime in “mid-2016”. The announcement trailer, available on YouTube, shows a game that looks very similar to Reincarnation; however, the project’s Kickstarter backers have been promised a free copy of Max Damage for their Steam accounts, suggesting a reasonable amount of difference between the games.

For those of you sickeningly young enough to be unfamiliar with the series, the original Carmageddon was released in 1997, a few scant months before the first Grand Theft Auto. An anarchic race game inspired by Death Race 2000 and Mad Max, it dropped you in a large arena and allowed you to win by either completing the race course, destroying all your opponents or running over every pedestrian on the map. Tabloid outrage, unsurprisingly, followed. Stainless made the first game and its sequel, 1998’s Carmageddon II: Carpocalypse Now (one of humanity’s defining achievements, and that’s 100% pure objective fact, honest) before some legendarily terrible console ports and the farming out of the third game to an Australian developer buried the series.

The forthcoming Max Damage promises all the features of a typical Carmageddon: over thirty cars, ten different arenas, career mode, four different types of online multiplayer and, of course, plenty of pedestrians. Given the aforementioned terrible console ports, and the fact that Reincarnation has had a middling reception (no-one at Absolute Gadget’s actually played it), we’d advise cautious optimism thus far. Still, a few months will see.

Disclaimer: the writer of this piece donated to the Kickstarter and will probably buy Max Damage even if it’s rubbish.