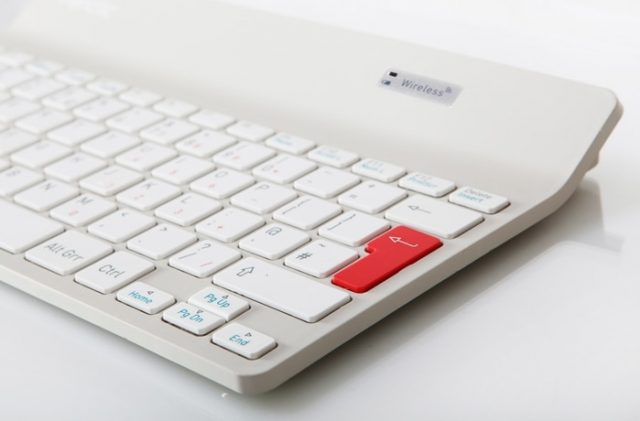 Without a keyboard, most computers would be useless. It is the main tool for interacting with your computer. But if you are looking for something a bit different and ergonomic, then the K2 Mini Keyboard from Penclic could be the answer.

The keyboard we review comes in silver and has more than a hint of looking like a Mac keyboard. There are some visual differences though. For a start the enter key is a bright shade of red. It is about the same width and depth of the Apple Wireless Keyboard, but with a top end that inclines (thee are where the rechargeable NiMH AAAs reside).

It also comes with a retractable USB to micro-USB cable that can be used to recharge the batteries, which should last about two months on a charge.

Setting up the keyboard is simple; charge the two batteries and using the cable, the small wireless receiver is inserted in a USB port.  No extra software or drivers are required, but this means it relies on that proprietary Nano USB-receiver wireless link to rather than using Bluetooth.

The keyboard is a standard QWERTY affair. There is also an additional number pad is combined within a block of keys towards the right of the main keyboard. If you are coming from a Mac, you have to get use to reversing both the Alt and Apple keys, and the Control and Function commands. Not difficult, but it’s another couple of steps to master.

We found signal dropouts common resulting in missing letters in sentences. That aside, typing is accurate and there are plenty of space between the keys.

The keyboard is a curate’s egg really. Keys are well sized but connectivity seems a bit off sometimes.

The K2 costs £54.99. A black version is available too and there’s also a corded C2 alternative if you don’t want wireless performance. Full details are on the Penclic website.