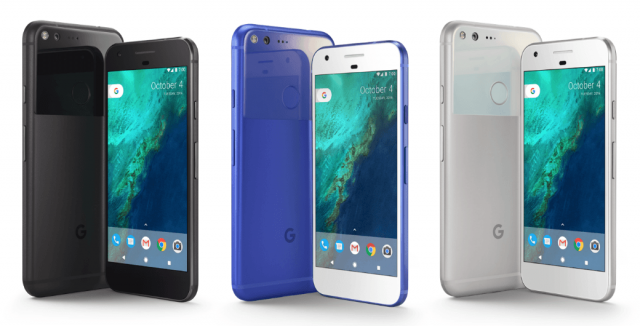 Google has ditched the Nexus brand of smartphones and come up with a new line of phones, namely the Pixel and Pixel XL. This new name spells the start of Google taking more control over the development and design of its Android phones.

Now that Google has finally made a phone of its own, without relying too much on collaboration with partners to come up with hardware designs, it is time to see if it is any good.

That is not to say they are sturdy and comfortable to hold, thanks to the curved back. The Pixel XL is a litter narrower than the iPhone 7 Plus as well as being a tad shorter, so this makes it slightly easier to type on the screen, almost one-handed. It is also 7.3mm thick so it is heftier than most other smartphones.

The frosted glass backing (which covers the top third) houses a rear-mounted fingerprint scanner. This not only unlocks the phone but will also act as a trackpad for actions on the display. This also means the Pixel and Pixel XL “home” button is on the back. This does mean that the bottom bezel is big and appears to serve no function. But the bezels at the side are thinner than the iPhone 7.

That said, the build quality is stunning. The power and volume buttons, as well as the ports, are well-designed. The body itself doesn’t flex at all. There is also no camera bump. What most people don’t realise is that the phone is wedge-shaped to fit the camera in at the top.

One problem is water resistance. The Pixel and Pixel XL are rated IP53 while Apple and Samsung rivals achieve IP57. While there are some reports of the Pixel working after being submerged in water for 30 minutes, we would in no way recommend trying this.

The phones are available in ‘Very Black’, ‘Quite Silver’ and ‘Really Blue’. The Blue option will make your phone stand out from the crowd, but that option isn’t available in the UK quite yet.

Sadly the Pixel and Pixel XL don’t have the same level of brightness as the Galaxy S7 or colour accuracy of the iPhone 7 and iPhone 7 Plus. That said, these Google phones are sharp and bright and resistant to fingerprints on the screen.

While the outside may not be as awe-inspiring as its rivals, it’s what’s on the inside that really counts.

While the Snapdragon 821 will lag behind the iPhone 7 and Galaxy S7, you won’t really notice it in everyday use. There are chip optimisations for better camera performance and scrolling.

Both phones come in 32GB or 128GB varieties and don’t feature removable storage. This means that the bigger storage version will be the one to have. That said, these phones come with unlimited Google Photo storage, which is a bonus.

What stands the Pixel and Pixel XL apart from the iPhone 7 is that the former phones sport a headphone jack as per normal.

Google is bigging up the camera in both devices. They feature a 12-megapixel sensor and f/2.0 aperture lens. Google also had the  lens and sensor rated by DxO and it came out as number one in its ranking of smartphone cameras with a score of 89. The Galaxy S7 Edge managed 88, while the iPhone 7 got 86.

The images from the Pixel and Pixel XL are great and saturated but it is clear to see that a lot of post-image processing has gone on and while the pictures look impressive, they do seem a little unrealistic. The Pixel uses an HDR+ mode to create these images with balanced highlights and shadows.

The camera app features a timer, grid lines, flash and basic white balance settings (cloudy, sunny, fluorescent and tungsten) in the top corner. There are a few more tools in a slide out. This slide out boasts features such as Slow Motion capture, Panorama and Photo Sphere modes, as well as Lens Blur.

The Pixel XL features a 3,450mAh battery. This is the same size as the one in the Nexus 6P.

The Pixel and Pixel XL sport fast charging, giving you up to seven hours of usage from a 15-minute charge up. When charging, you will need to remember to bring the cable with you as it is a USB-C port so will require the right cable.

With Google, you expect a stock version of Android. Well that was the case in the Nexus phones but things are different in Pixel world. It features Pixel Launcher, with is and overlay on top of Android 7.1 Nougat and changes a few things.

There is no app drawer icon, swiping up gets you your apps. The Google search box has gone to be replaced with a “G” widget.

Google Now has also been replaced with Google Assistant, its artificial intelligence assistant that appears virtually everywhere in the phone and apps. This also lies behind Google Home, which will be a competitor to Amazon Echo.

Google Assistant is a personal, chatbot-powered AI that can answer questions, book hotels, and suggest replies to friends’ messages. Google Assistant can be accessed by holding the home button and uttering “OK Google”.

The software will also be ready for Google’s Daydream View VR headset, which is slated to appear later this year.

There is a lot to like about the Pixel and Pixel XL. The software is very usable and the hardware is charming if a little uninspiring at times.

The camera is a great step forward in terms of performance and usability.

Sadly, it doesn’t have that much water resistance, which is something all the major phone vendors have in their devices nowadays.

But Android fans will have a lot to love with these phones. Google Assistant and the camera raise the game of Android phones and will make it difficult for iPhone lovers to go back to their phones after trying the Pixel out.