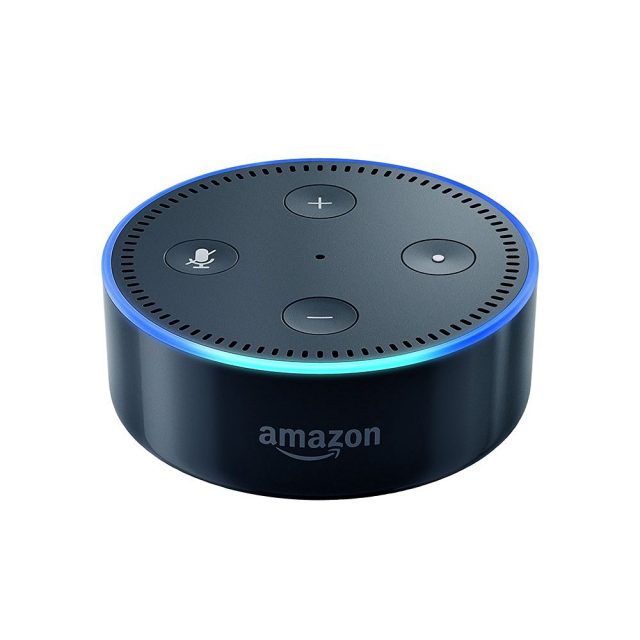 Artificial Intelligence (AI) has taken a long time to move from the realms of science fiction and into our homes, but the Amazon Echo Dot (and its bigger sibling the Amazon Echo) do just that.

The Amazon Echo Dot just about delivers on its promise to be a virtual intelligent assistant. It is a lot smaller than the Echo and a third of the price. This makes it a very affordable alternative to the Echo. It also has a number of features that its big sibling doesn’t have; such as Bluetooth and audio out.

The Echo Dot looks almost exactly like a hockey puck or a small tin of baked beans. In many ways, the Echo Dot is more useful than the Echo. For a start, you can pair it with speakers via an audio lead or Bluetooth. Or you could use the built-in speaker that the device comes with. While the sound from this isn’t bad (The Echo’s speaker is very good BTW), connecting to speakers pretty much gets you the full experience. That said, the built-in speakers serve a purpose, that’s how it talks to you.

The finish is glossy instead of matte and this makes it look cheaper. On the top are volume controls, a mute button and another button (we’ll come to that later).

It is powered by a micro-USB port. In theory, you could run this off a battery pack and a Wi-Fi dongle – so handy for taking away on holiday (almost).

The Echo Dot does virtually everything the Echo does but at a fraction of the price. It is always listening for the prompt words (“Amazon”, “Echo” or “Alexa”). You can ask it a tonne of questions.

But aside from asking it what the time is or what music you want to play, the Echo Dot can also be used to control heating, lighting or other Internet of Things devices around a smart home.

It uses what Amazone calls Skills for the Echo Dot to do your bidding. We have tested it with Hive and Lifx, and while it responds to simple commands (turn the light on, turn the heating off), more complex commands can sometimes flummox the things.

That said, it does hear everything you say to it, which means that you have to train yourself to say things the right way instead of hoping it can work out what you mean. It gives trying to understand you a good try, but it is by no means perfect.

The microphones on the Echo Dot are very good at picking up what you tell it, even if you are in the next room. If you have more than one of these, Amazon has a new feature it has just launched called ESP (Echo Spatial Perception). This will enable the devices to figure out which of them are nearer to you and the closest one will respond.

It has a build-in speaker, so while it won’t win any audiophile awards, it is pretty serviceable. You can also connect to any speakers and the output form this is pretty amazing, given the price. The sound is very clear and if you have good external speakers, this will be better than the Amazon Echo.

Amazon Echo Dot: Should I buy it?

The Echo is great but pricey. The Echo Dot is amazing value in comparison. You could buy three for the same price and as long as you have enough speakers, this will be a great way to add home automation for peanuts. At the moment, Amazon is offering six Echo Dot units for the price of five.