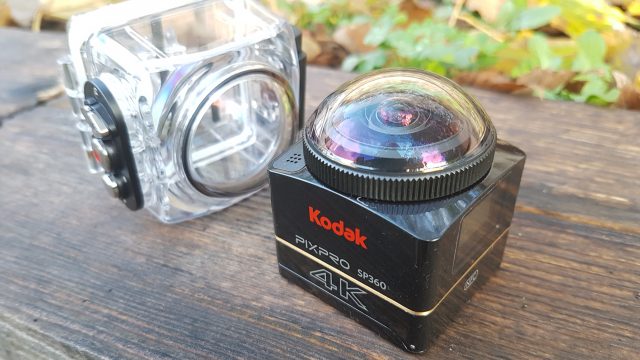 The Kodak Pixpro SP360 4k action camera isn’t the most beautiful of action cameras, but it’s one of the most technically accomplished, and is definitely in the running for the most complex nom de plume award.

We’re testing the ‘Extreme pack’ version here (Jessops, £349) which solves many of the moans you’ll get with a lower-end action camera package – there are mounts galore here, including a competent underwater case, bike bar mounts, helmet mounts, and a host of others to boot. There’s also a ‘duo’ version available, which is essentially two camera units bolted together, and unsurprisingly is roughly double the price. The Kodak Pixpro SP360 4k action camera is aimed at the semi-pro VR video market, and essentially means you can shoot 360-degree video without fuss or hassle, rather than stitching together footage from several units. With a single lens that’s not a fully immersive spherical capture, it’s 360-degree horizontal angle, and a 235-degree vertical angle. The ‘duo’ pack widens this out to the full monty 360 x 360 sphere, rather like the competition such as the Ricoh Theta S or the Samsung Gear 360, but with more flexibility.

Setup is relatively easy, a microSD (as big capacity as you’ve got), a charged battery and you’re off. We’re still slightly bemused by the range of screw-in filters and protective lenses that come in the pack, which all look identical, but overall it’s a competent package.

We happened to be able to test the Kodak’s highs and lows quite literally, taking it to 3500m in the alps on a climbing trip (along with a bunch of other climbing gear review tech), and down to 20 metres-odd on a UK diving trip to Portland. Our topline is that it’s a decent cam, shooting well-focussed 4k footage without fuss, and delivering a decent battery life in spite of some cold autumnal and altitude-related conditions. The controls are easily operated wearing gloves, and once setup it’s very quick to power up and start shooting – something cheaper rivals are less good at.

From a pure tech point of view, the Kodak is pretty impressive, shooting up to 3,840 x 2,160 resolution, 30fps video through a single 360° Spherical Curved Lens (235° FOV), via a 12.76-megapixels 1/2.33in BSI CMOS sensor. However, it’s when you come to tweaking the myriad of settings available that you’ll immediately be reaching for the instruction manual, because it’s not an intuitive process, and there’s a lot of them. You can adjust a host of settings in-camera, from resolution, to perspective, through white balance, to turning the image stabilisation on or off, and these are all neatly hidden inside a series of nested menus, which makes navigation quite complex.

Ingeniously the accessories are very nearly the same as competitor GoPro’s, so with a little bit of fiddling you’ll be able to adapt any specialist competitor mounts (we added a longer bolt to a dive rig for example), unlike some. A neat trick in common with other high-end cams comes in handy once mounted, in that you can check recording angles and review footage via the smartphone app, rather than needing to unbolt the camera each time. Although we didn’t get one in the box, there’s even a drone attachment kit available, if that’s your jam. It was really underwater the Kodak really came into it’s own from a visual POV, with the 360 angle making more visual ‘sense’ than it does on land. To be honest while the 360 ‘VR ready’ footage on offer is the cam’s USP, it’s also it’s killer – unless you ‘need’ 360 video, it’s hard to get that excited about this as a package. If you do, it’s brilliant.

Kodak have an app that will link up with the camera, and to be fair to them the range of in-app options is impressive. Once you’ve tethered your smart device to the SP360 you can change settings, toggle between features, control, start and stop recording. However, working out where they are and how to access them isn’t overly intuitive, and does require a manual. Once read, you’ll be able to view and delete captured video and stills, as well as tweak settings. Once you’re cracked it it’s a decent app, and – most importantly – checking new video and deleting it is pretty simple once you’re in.

In summary, this isn’t an action cam for the casual user, but at this price point and considering the whole 360 VR 4K schtick, that’s no surprise. However, it does deliver quality, clear footage in a neat package that’s more aimed at the technically savvy than some of it’s competitors.