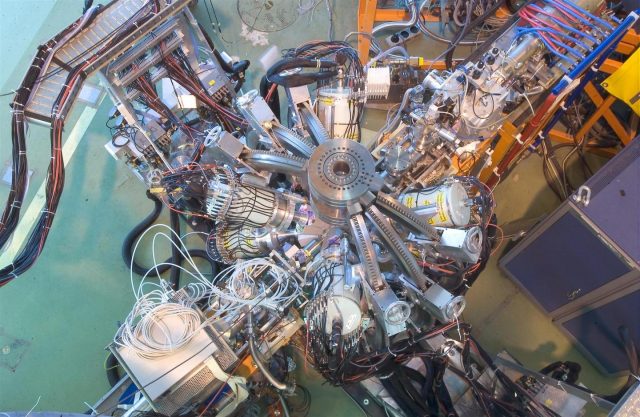 After spending 15 years scanning patients at an Australian hospital, an unwanted MRI machine has been recycled and given a new lease of life at the world’s biggest science experiment as a scanner that will now study the material that makes up exploding stars.

A team of UK scientists and engineers reclaimed the superconducting magnet from an old MRI scanner, before modifying it for use at CERN to help us better understand how the Universe works. This recycling project cost about £130,000 – whereas producing a bespoke magnet from scratch would have cost £1million or more.

After reaching the end of its life at the Brisbane hospital, the magnet undertook an epic journey round the world as it was shipped to CERN, the home of the Large Hadron Collider, in Switzerland. A small team from the UK’s Science and Technology Facilities Council (STFC), including two young apprentices from STFC’s Daresbury Laboratory, worked to strip and reconfigure the magnet so that it was made ready for use on the ISOLDE instrument.  The pair of apprentices from the UK helped strip the insides from the magnet, making it ready to house state-of-the-art particle detectors instead of human patients.

In early 2017 the magnet was ready for final testing and installation. With help from the CERN cryogenics team, the magnet was cooled using liquid helium before being successfully re-energised to prove that it was ready to work again as a superconducting magnet in its new role.

The recommissioned magnet has now been carefully moved to its new home in the ISOLDE hall at CERN.

Ian Lazarus from STFC’s Nuclear Physics Group, who is the Technical Coordinator for the ISOL-SRS project, said “For the technical team at STFC the real challenge has been ensuring firstly that the magnet was going to be fit for purpose, then that we could get the magnet back to Europe in one piece before completely reconfiguring it to make it ready for use in its new role.

“As an organization that offers apprentices opportunities to work on complex engineering tasks this project has enabled two young apprentices from STFC a once in a lifetime chance to be a key part of this project.”

Once fully operational the magnet will perform a vital role at ISOLDE, a nuclear physics facility which provides both low-energy and high-energy re-accelerated radioactive beams to observe the properties of atomic nuclei. The high energy beams are provided by the HIE-ISOLDE post-accelerator, a superconducting linear accelerator recently commissioned at ISOLDE.

Professor Robert Page from the Physics department at the University of Liverpool, who leads the international collaboration that will exploit the magnet, explained a little about what the recycled magnet will enable the research team at CERN to achieve, “The ISOL-SRS project is designing and constructing spectrometers to explore subtle features of the forces that bind atomic nuclei and nuclear reactions thought to occur in stellar explosions.”

“This ex-MRI magnet is a vital component of the spectrometer to be exploited at CERN’s world-leading HIE-ISOLDE facility and following its successful recommissioning we are now in a position to embark on this new and exciting science programme with our collaborators from institutions across the UK, Europe and Argonne National Laboratory in the USA.”