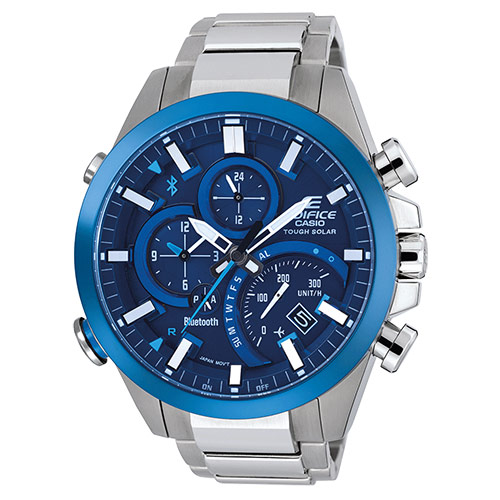 It would seem that everyone wants an Apple Watch but what about having a normal watch? Casio with its EQB-500DB, touts itself as the world’s first smartphone link with world time 300 cities.

It is feature packed with Bluetooth on board. Linking the watch to a smartphone provides access to the correct time, not only in the current location but in any of 300 cities around the world.

Alarm setting and control over various other functions from the smartphone enhance operability to an unprecedented high level.

This means a button push accesses your smartphone. Using the time information in the smartphone, the watch automatically adjusts the time. It also supports automatic connection to your smartphone (up to once a day). No matter where you are in the world, it quickly receives the correct time for your location

The watch’s time can be set by choosing one of the 300 World Time cities from the world map in the smartphone app and the time for that city is displayed. You can also set functions such as alarms from your smartphone. Content is sent instantly to the watch, making it easy to configure the settings.

The watch can also alert a user to emails sent from up to five addresses registered in your contacts. It also comes with a phone finder so you can use the watch to make your phone make a sound to make it easy to find if you’ve lost it.

It also converts light from the sun and other sources into power to continuously drive its functions.

This watch has a particularly secure safety catch, which helps prevent the strap from opening by mistake. The Casio Edifice Tough Solar watch is a beautiful looking watch with great features.

The watch is available form Amazon for £335

The best Apple Watch apps you should download today

Get airbrushed on a night out

Try on a virtual Tissot watch

Try on a virtual Tissot watch