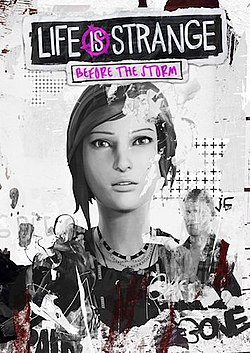 We loved the original Life is Strange, an episodic adventure about a teenager with time-control powers that was suffused with the particular bittersweet feel of late adolescence. But that game came to a clear end, so is a prequel, and one made by a different development team at that, in any way necessary?

Happily, while Before the Storm probably wasn’t necessary, on the basis of the first episode, “Awake”, it’s very much worthwhile.

Before the Storm takes place in 2010, three years before the first game, and places players in the shoes of original heroine Max’s estranged best friend, Chloe Price. The game charts the beginnings of Chloe’s intense friendship with the most popular girl in school, Rachel Amber – the same girl who’d gone missing at the beginning of the original game, so there’s a big old pile of dramatic irony to their relationship.

The foregrounding of these two is risky, but it works. Rachel, a mysterious figure haunting the first game, could have fizzled out when presented in the flesh, but if anything actually meeting her adds to her contradictory mystique. As for Chloe, easily one of the most compelling characters gaming’s come up with for years, playing as her is a fascinating study of contrasts to the first Life is Strange’s protagonist.  Whereas Max was quiet and shy, Chloe walks with an exaggerated swagger; Max passively took photos of her environment while Chloe carries a marker pen around to graffiti surfaces at a moment’s notice; and, most notably, Chloe, of course, lacks Max’s time-rewind capabilities.  Otherwise, the gameplay is much the same – a mix of puzzle-solving and branching conversations – but the lack of a rewind button as a fallback has a heavy effect, making your decisions feel weightier.  In place of a rewind, Chloe has her own Backtalk mechanic, where you try to win arguments using quick thinking and observation – if you’ve played either of the last two Deus Ex games, you’ll know the sort of thing to expect.

The game’s setting, the fictional Oregon town of Arcadia Bay, remains a delight to explore.  This first episode mainly restrains itself to locations that veteran players will be familiar with but introduces a few new areas, most memorably a dilapidated lumber mill that’s been turned into a venue for a punk gig.  Characters, too, are a mix of old and new, and while the game sometimes gets uncomfortably close to merely repeating past glories (most notably, “Awake” ends almost identically to the first game’s first episode, with a montage of various people staring slack-jawed at a natural phenomenon), it keeps itself on the right side of derivative.

The first game’s painterly aesthetic, with a heavy emphasis on expressive lighting, is maintained – along with, less pleasingly, the occasionally wooden facial animation.  It is a marked improvement over the original title, but we’d have liked to have seen more improvement in the intervening two years, especially since Before the Storm doesn’t have the excuse of needing to be able to run on the Xbox 360.

The soundtrack was one of Life is Strange’s highlights, and new developer Deck Nine has maintained the quality here, in a different way – whereas the first game was mainly licensed music with some original composition, Before the Storm employs London indie folk band Daughter to provide some excellent original tracks.  As for the voice acting, one of the major potential stumbling blocks of Before the Storm is that Chloe’s original voice actor, Ashly Burch, was unable to reprise her award-winning performance due to a voice actors’ guild strike; thankfully, her replacement Rhianna DeVries (who was Chloe’s original motion capture actor anyway) is up to the task, helped by the fact that Burch could still put on her screenwriting hat to provide consultation for Chloe’s dialogue.  The rest of the cast all perform admirably, helped by the fact that the original game’s sometimes endearingly clunky dialogue has been considerably improved (the fact that Before the Storm is developed by an American company rather than a French one may have helped there).

Overall, while Before the Storm may not really have been a game anyone’s been crying out for, this first episode indicates a game that is well worth your time.  Life is Strange veterans will lap it up, and while you do really need to have played the first game to make the most of it, it’s well-crafted enough to stand on its own merits – not something you can say about a lot of prequels.

Life is Strange: Before the Storm Episode 1 is available now for PlayStation 4 (version reviewed), Xbox One and PC as either a single-episode pack, complete season pass or Deluxe Edition with extra content.  Episodes 2 and 3 will launch at later, unspecified dates.