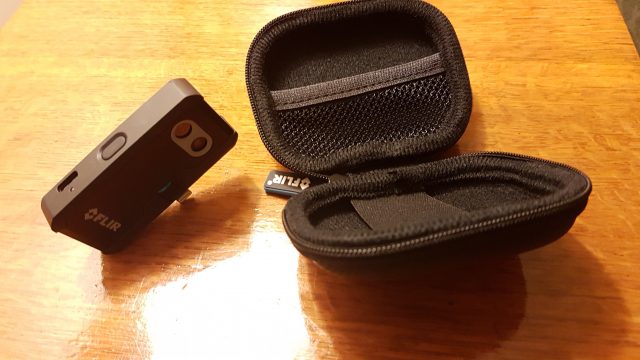 You might never have heard of the Flir One Pro, but we’d be willing to bet your local heating expert has. That’s because the company has long heritage in building industrial grade tools for engineers, including a range of industry-standard thermal monitoring devices. Now you too can have that same technology in the palm of your hand – read on for the Flir One Pro review!

In the minimalist Apple-style box you’ll get the device itself, a USB-C charging cable, and a rather neat zippered semi-hard case to keep everything stored in. 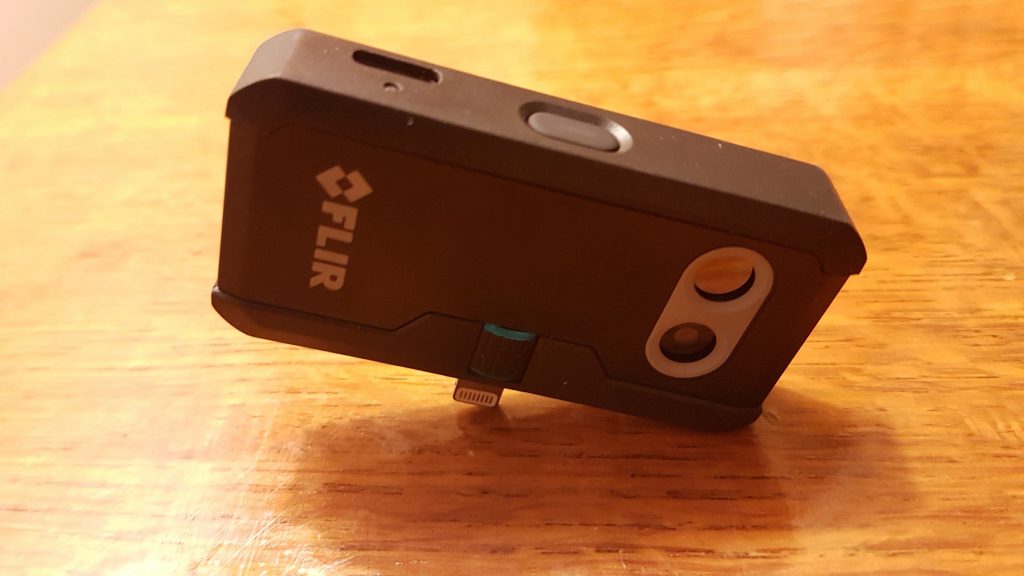 The Flir One Pro device itself is a matchbox-sized block that plugs into your tablet or phone’s charging port (there’s a Lightning version for Apple, and a USB-C version for Android), and thus turns your device into a thermal camera. It’s a proper one too, not your cheap mass-produced nonsense. Indeed, FLIR claim that the Pro has been drop tested to 1.8 meters, and it certainly looks the part in a solid rubberised finish. Flir claim accuracy levels of ±3°C or ±5%, the battery lasts for 1 hour, and takes 40 mins to charge to full from empty. There’s a helpful battery charge indicator in the app, as well as a red led hidden behind the power button that’ll start flashing when juice is scarce. 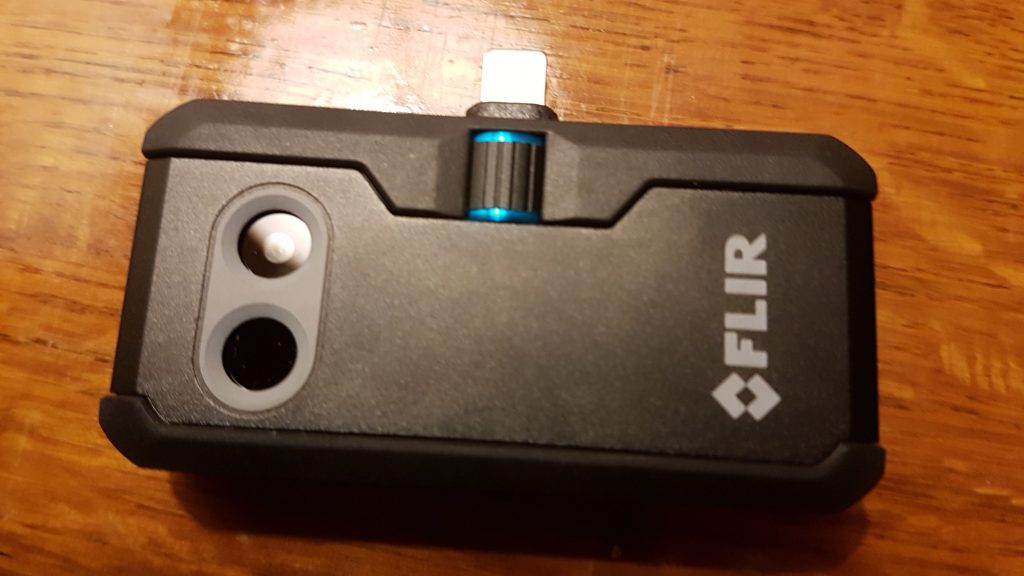 A neat touch from Flir is a small knurled wheel underneath the Lightning connector, that allows you to retract and extend the connector to get a perfect fit around your phone or tablet case – previous models forced you to remove the case, which isn’t ideal.

Downloading the free companion app is straightforward, and having created the inevitable account, plug in the device, turn it on and you’re off heat-detecting. The dual cameras perform the neat trick (Flir calls it MSX technology) of visual and thermal imaging, which results in an easily identifiable image of whatever you’re pointing it at, with a thermal overlay, so it’s easy to orientate and navigate around your environment. 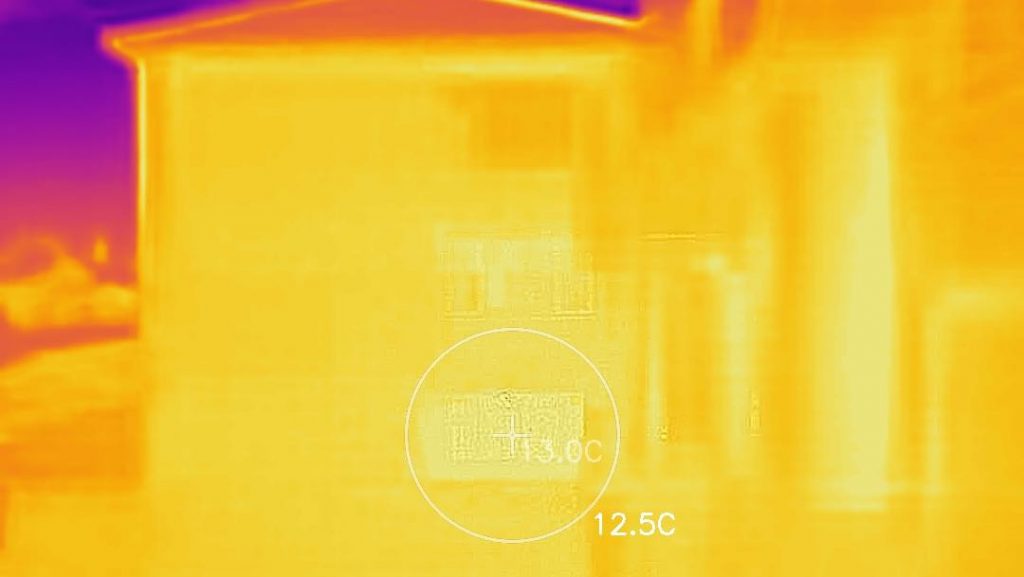 The camera provides a variety of capture modes at your fingertips, from basic still images (saved at 1440×1080), to Video, Time lapse and Panorama settings. Particularly helpful is the ability to create multiple spot temperature meters and selectable onscreen temperature tracking regions, so you can really get a handle on that cold spot by a window, or similarly detailed investigation. There’s a countdown setting for still images, which is particularly helpful if you’re using the spot temperature function, giving you time to steady the crosshairs with both hands. 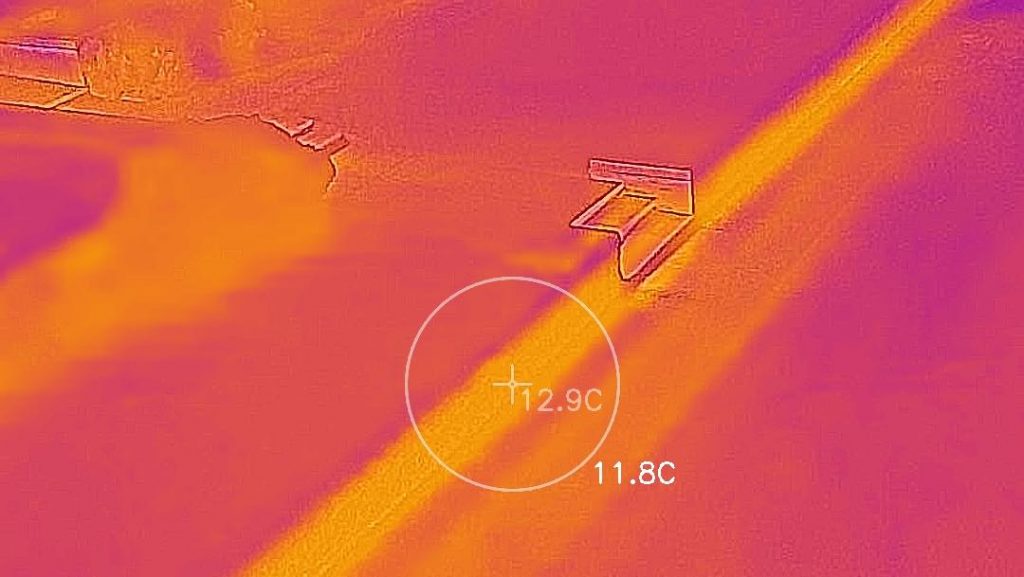 It is surprisingly fascinating to suddenly have thermal vision, like a smartphone-powered X-man, and the uses are really only limited by your imagination. The thermal sensors are limited in potency by US military export laws, for obvious reasons, but even so deliver a fantastic experience for the average user. Bare feet on carpet leave a visible trail for several minutes, for example, which does change the rules of hide-and-seek somewhat.

On the downside, small thermal cameras such as this do suffer from reflections, which can be misleading (used in front of a window gets you a thermal selfie), and the overlay of visual and thermal cues can be confusing in very low light environments. However, it doesn’t take long to get used to this, and of course the spot temperature meter function removes any doubt if needed.

Overall, it’s easy to recommend one of the Flir family, round the house they’re a useful tool, and often reveal fascinating insights into the environment around us. From watching animals in the garden at night to snapping thermal selfies with the kids, there’s fun and practicality to be had in spades. The only question is whether you can wangle it as an early Xmas present or not…

The Flir One Pro is available now on Amazon for £399.99, while its cheaper sibling, the Flir One is at £219 for either iOS or Android (USB-C). To learn more about Flir One, visit www.flir.com/flirone.