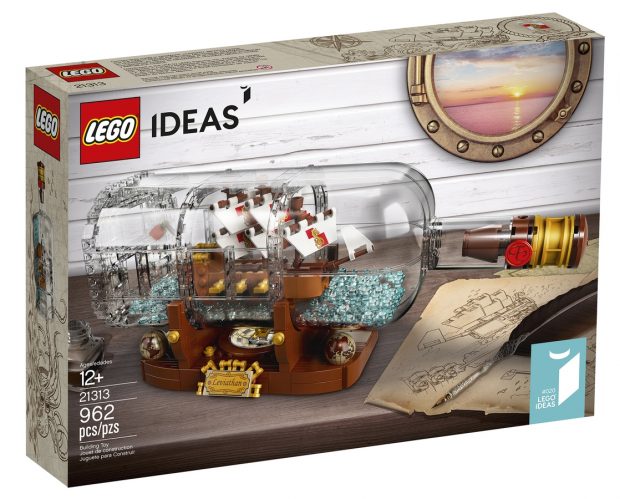 The ship in a bottle has been given a new lease of life, this time in Lego form.

The LEGO Ideas: Ship in a Bottle is based on an idea submitted by a fan of the plastic brick called Jake Sadovich. He sent to the Ideas platform back in November 2016.

The nautical-themed box contains 962 pieces split across six bags; 284 of those bricks are transparent blue 1×1 round plates that do nothing apart from giving it a sea affect.

The rest make up the ship (‘Leviathan’), the bottle, a bottle stopper, and a display stand. It really is something to be built then displayed.

There are 167 steps to construct the ship. The first bag of pieces took less than half an hour to build. The Ship features a raised deck at the stern, captain’s quarters, 6 cannons, 3 masts, a crow’s nest and assorted elements including printed sails and the ship’s flag.

The bottle takes around 40 minutes to put all the pieces together. It features a detailed, buildable cork with new-for-February 2018 wax-seal-style element and over 280 translucent-blue, water-style elements inside.

Once completed the ship display looks really nice with some great details. It is a beautiful model and worth the money.

It costs £69.99 and is exclusively available from LEGO Stores and shop.LEGO.com.