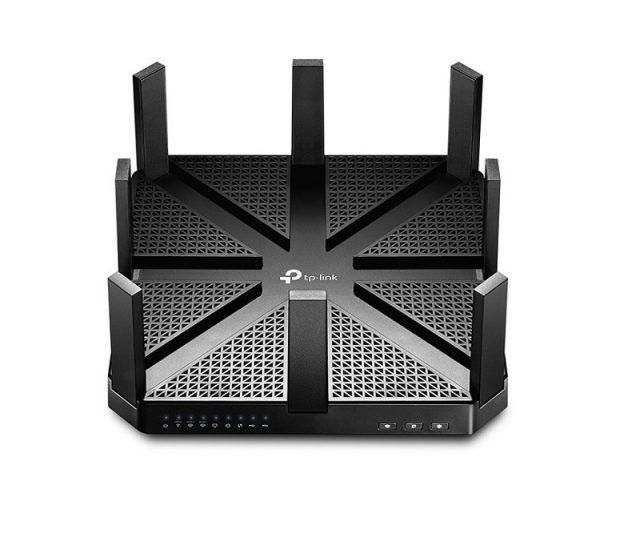 The TP-Link Archer C5400 router is claimed to be one of the most advanced wireless routers ever built by the company.

It sports a dual-core Broadcom BCM4709C processor, running at 1.4 GHz and 512 MB of RAM. It boasts new technologies like NitroQAMTM from Broadcom and 4-Stream, which are supposed to provide minimum latency when playing online games and increase the maximum theoretical bandwidth to 1000 Mbps for the 2.4 GHz wireless frequency and 2167 Mbps for each of the two 5GHz wireless frequencies. It claims a maximum bandwidth of 53334 Mbps.

At only 1.7 inches tall and a little less than 10 inches wide, the AC5400 is far and away the smallest router we’ve seen.

The router has eight external antennas, each has its slot and can be easily raised or lowered. Archer C5400 can run three separate Wi-Fi radios at once: 2.4G, 5G-1, 5G-2. With MU-MIMO technology, the Archer C5400 can provide four simultaneous data streams, allowing all connected devices to achieve speeds up to 4X faster than standard AC routers. Each device transfers data in equal time, boosting the overall network performance by sacrificing network time on your slow devices. In theory, the theoretical speed will only fall from 2167 Mbit / s for each of the two 5 GHz frequency bands and 1000 MHz for the 2.4 GHz frequency band to 1733 Mbit / s and 800 Mbit / s, respectively.

At the back, there is one USB 3.0 port, one USB 2.0 port, the port for connecting the router to the internet, four Ethernet ports, the Reset button, the Power button and the power jack.

The router can either be placed on a flat surface or can be mounted on a wall thanks to slots at the bottom. Once powered up, you can start configuring it via the Quick Setup Wizard. Once the initial configuration is done, you can see the administration user interface and start configuring more settings in detail.

There is also link aggregation. This is commonly associated with the functions available on switches. It consolidates multiple physical ports into a logical port to achieve higher support rates. At present, our high-end home router single Ethernet port support the maximum rate of Gigabit, but with the popularity of NAS, many users will actually choose to buy a NAS storage as a home shared hard drive, in order to meet NAS use, the home router also introduced a link aggregation function, will be up to two Ethernet ports for link aggregation to get between the NAS and the router up to 2Gbps cable negotiation rate.

Despite its tiny stature, the TP-LINK Archer C5400 managed to push out the best performance we’ve seen from a router across the board. This is everything you could want out of a high-performance mid-price wireless router.